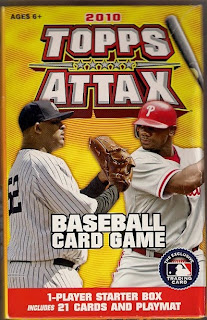 Match Attax -The card game that puts you in charge of the action!
Aimed at children? Obviously. Collected by grown-ups? Possibly. Nice looking cards? Definitely.
There should be two code cards plus 4 foil cards including an exclusive 'Legends' sepia foil card. 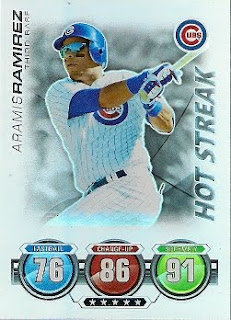 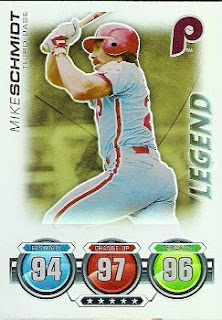 I know there isn't a great deal of love for the Match Attax cards amongst 'serious' collectors. They have no numbers or statistical information, no relic/auto 'hits' but it is helping to draw in the next generation of collectors. That cannot be a bad thing.

Topps have tried hard to make this collectable and achievable. The foil cards, although not to every collectors taste, are nice and shiny.

I also know a Mike Schmidt collector who would appreciate the sepia legend.

Posted by jackplumstead at 21:35 2 comments: 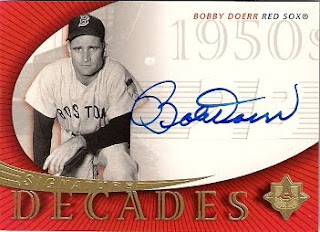 A few months back I was pretty pleased to find a collector of the Arizona Diamondbacks. I had built a large stack of D-backs cards and seriously considered adopting another team, as there were some really nice cards disappearing into the D-backs pile.
Fortunately Tim AKA skoormit got in contact and a D-backs/Red Sox trade was forged. I like to send out cards first and feel that the receiver decide what is fair in trade. This usually works well as collectors of baseball cards, in my experience, are a very generous cohort. In some cases I never hear again but that is rare.
Tim was honest and said he didn't have any Red Sox at the moment and would attempt to gather a few. Move swiftly forward to two weeks ago ...
A desperate e-mail from Tim saying he had good news and bad news. 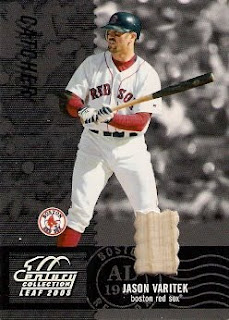 The good news was that he acquired some Red Sox in other trades he had made. The bad news, regrettably, was that in posting the cards the Post Office had mistakenly taken the UK for United Kingdom to mean the Ukraine. He was told that there was little he could do about it, once the bar code was printed that was that. The post stopped for no-one. A lucky collector in Eastern Europe would recieve an unexpected windfall. 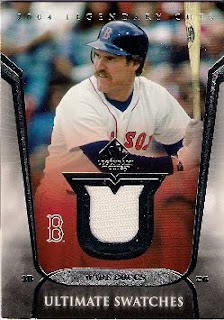 Shortly after the package from Tim AKA skoormit arrived at my door and not via the Ukrainian sorting office. My faith in the snail mail system rekindled, someone had realised there was no Westgate-on-Sea in the former Soviet Union. A great result and what an awe inspiring selection of cards it turned out to be. 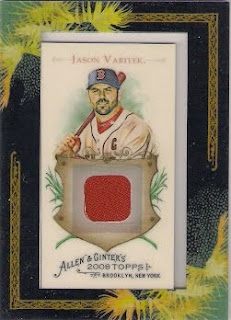 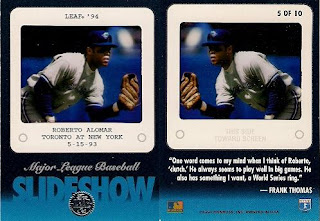 I was reminded of the many hours spent in the dark during geography lessons at college when I saw this 1994 Leaf insert.
My geography teacher was a widely travelled gent and delighted in showing us his collection of snapshots. My dad had a slide projector. It was mind numbing process of 1 slide in, 1 slide out the other side. My geography teacher, at the forefront of technology, had a remote controlled carousel that held, what felt like, a thousand slides. How many pictures can you enjoy of Ayres Rock in different hues at sunrise, sunset or when it rains. It's lovely, highly significant to the Aboriginal people but after hundreds of slides it's still a rock. Is it me or do slides take the magic away.
He even tried a few times with mild success, of playing music while the slides rotated and clicked past. Sometimes it would come grinding to a halt with the occasional slide refusing to 'drop'.
So in 1994 Leaf produced a set of 10 Slide show inserts which tried to capture the real look and feel of a slide.The picture is printed on sheet of plastic film. I presume this is an attempt at nostalgia as slide projectors had been replaced by computers and video. More recently by DVDs, interactive whiteboards and PowerPoint presentations.
Perhaps in 10 years, maybe 20 there will be an insert that looks like an iPod. You can drag your finger across the card to reveal not one but many pictures of the player, perhaps it will play a video of the player in action. Within the realms of possibility?
Posted by jackplumstead at 22:40 1 comment: 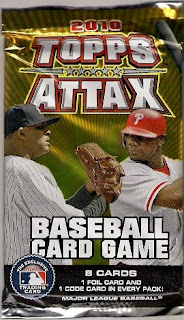 I watched two guys open a starter box of Topps Attax each on some obscure website called Beckett. They tried really hard to get excited about the cards but failed. One even said something like '... well you play a game. I don't think I will be playing it but I might collect the cards. They look pretty good.'
It was a little understated as the Attax brand is a huge money spinner for Topps, accounting for about a quarter (according to the Wall Street Journal) of their turn-over. The Match Attax football version has been huge in the UK and Europe. According to the experts the reason was that Topps combined the card collecting habit of old with the new fantasy role-play competitive game of trying to build a winning combination of cards to defeat an opponent.
I will throw my idea in too.
Being a primary school teacher I saw how popular the Attax were on the playground. Firstly they were affordable (8 good quality cards for 50p), secondly they looked good (bright colours, nice pictures) and thirdly there were special 'chase' cards. The children desired them and they traded like anything to get them, even purchasing the tin, book, folder and magazine to obtain the limited cards. They really only wanted to collect the base cards of the team they supported- Manchester United, Chelsea, West Ham United, etc. A few wanted the entire set, but all of them wanted to own some of the Shiny, Glittery Rainbow Foil cards. Very few, if any of the children I saw trading cards actually played the game.
However I'm not sure of the longevity of the product. Topps milked the product for what it worth this year with Match Attax Extra, Match Attax World Cup Edition, a supermarket Attax special pack and Slam Attax. Plus Panini leap on the band wagon with Adrenalyn XL , spreading the demand very thin while keeping supply super high. There are half full boxes in all stores around my way. So whether it is as popular next year we have to wait and see.
But the guys on Beckett were right.
They look pretty good. 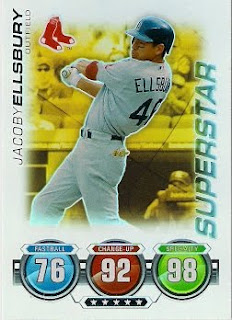 I was gifted 9 packs of Topps Attax baseball which I will open in my ongoing search for Red Sox at 'Pursuit of Red Sox'
Posted by jackplumstead at 21:18 No comments:

The Joy of Completion Part 2 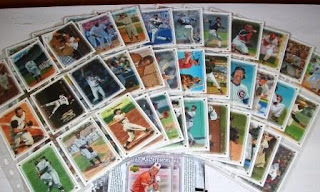 It is delight to see.
Full 9 pocket pages.
Here is the complete base set of 2007 UD Masterpieces. I was 15 cards shy of the 90 card complete base set. I recently discovered the set collectors dream 'Check out my Cards'. They cost a little more to send than usual but they were delivered quickly and very securely. If you haven't already tried this site, I highly recommend it. Those last 15 cards were easily checked off and I can breathe a little easier now. That is until until 2010 Allen and Ginter hit the shelves June sometime.
Posted by jackplumstead at 14:48 No comments: