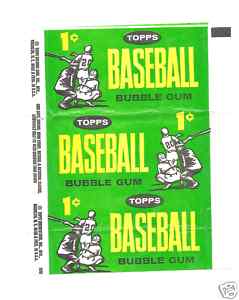 If there was an ultimate set of baseball cards that you could collect, what would it be?
I'm not talking a money is no object set, like a complete set of T206. I'm talking an obtainable goal. The set could include a few difficult, rare, possibly expensive cards that you needed to hunt down, bid and lose/win or trade for.
A set that, for whatever reason, really interests you. Are you thinking 1952 Topps, 1951 Bowman, 1954 Red Heart dog food set, maybe? Or are you tastes more recent like 2005 Bowman Heritage.
For me it was the 1980 Topps set, mainly for sentimental reasons and I achieved that goal with a little (or big) help from my friends. In fact while attempting this feat I was contacted by a fellow 1980's set collector who was after a slabbed version of each card. There's a goal and a half.
Now I am turning my attentions to the 1964 Topps set, again for sentimental reasons. 1964 was the year of my birth. I also hope to, at some point, to obtain a 1964 Topps wrapper .
I will be honest and say that I think this will be one of those life long goals. This will not be time limited as there are a number of difficult, as well as very expensive, cards to obtain. Mickey Mantle and Hank Aaron are the first to come to mind. Pete Rose, Willie Mays, Roberto Clemente, Sandy Koufax, Roger Maris......the list goes on. I have already bitten off a small chunk of the 'cheaper' base so I'm on going in the right direction! Hoping to pick up a few 1964 coins, Bazooka, Topps Giant and Stand Ups along the way. 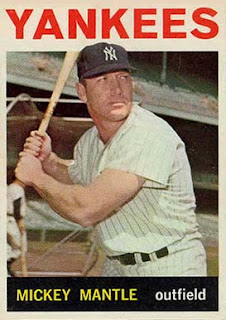 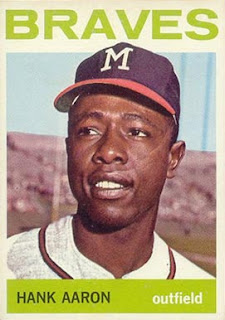 A few weeks ago Wax Fantastic (amongst others) revealed the Topps sell sheet for 2013 Topps Heritage. If you keep up with Heritage then you know why this product would be of interest. 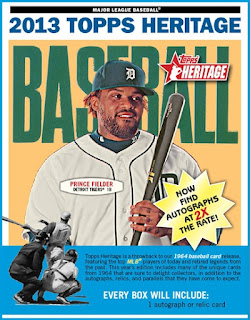 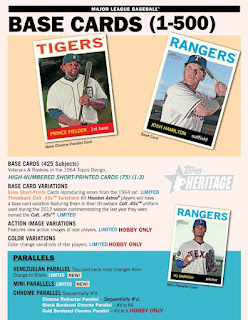 It is great to see the inclusion of some original 1964 cards however 1964 Bazooka are a buyback insert as are 1964 Tattoos. Luckily the 1964 Venezuelan variation, complete with black rather than orange backs, are an insert, although limited. 1964 Topps Giants are included as box toppers and 1964 Topps coins will be embedded in a relic limited to 5 copies. Why not include the coin inserts in packs as they did in 1964? 1964 Topps Stand ups were already included as an insert in 2011 Topps Lineage. 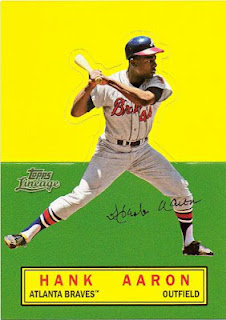 Back to the original question- What would be your ultimate set to collect?

Posted by jackplumstead at 21:30 5 comments:

Trade with Heartbreaking Cards of a Staggering Genius 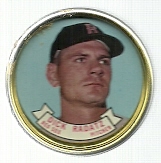 Now know as My Year Without Cardboard. Matt is spending the next 12 months in the Ukraine. This must have been one of the last trades he sent before he went on his tour. Follow his Ukrainian adventures on Use my Camera blogspot.
Now back to the cards he sent. What an incredible diverse selection or Red Sox Matt sent.

Firstly shown above;
1964 Topps Coin #30 Dick Radatz
This set contained a 164 metal coins and were inserted into the Topps wax packs. 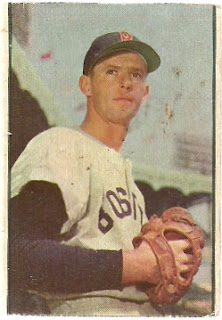 1953 Bowman Colour #35 Maury McDermott
A much loved , cut and lovely card from an early Bowman series. 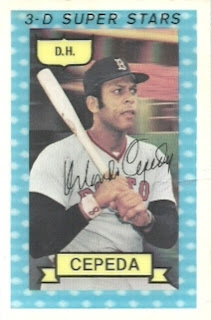 1974 Kellogg's 3D Super Stars #24 Orlando Cepeda
These small 3D cards were only available from Kellogg's. I have done a little research and I cannot determine whether you found them inside the boxes of cereal or by collecting box-topps.
﻿ 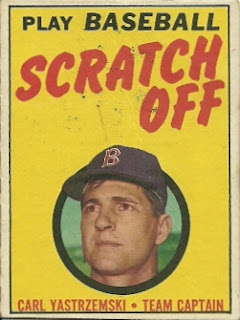 1970 Topps Scratch Off #24 Carl Yastrzemski
The Scratch-offs were inserted into 1970 Topps baseball cards, one per wax pack. Unfolded, they formed a game board which is played by scratching off each one of the 44 boxes covered with black ink. There must have been versions of this in all different kinds of sports. I remember playing a football variation at about the same time. 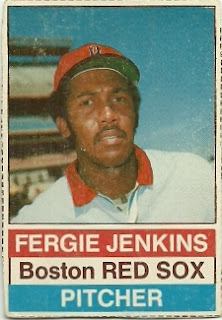 1976 Hostess #138 Fergie Jenkins
I love the fact that these were cut from the bottom a box of snacks. How many must have been ravaged by an over zealous 10 year old. This particular card is very nice, so they had the sense to ask an adult to cut it out. This set is also unique as 1976 was 'the bicentennial' year and everything apparently was swathed in Red, White and Blue.﻿ 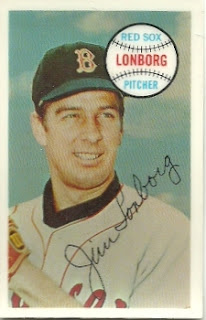 1970 Kellogg's #49 Jim Lonborg
The first of Kellogg's 3D sets to be released with the relatively new 3D technology. This set has a really lovely design and simple with the baseball logo in the top right corner.
Thanks Matt, these great baseball cards (and coin) are a welcome addition to the collection.
Posted by jackplumstead at 19:58 1 comment:

Trade with Matt aka docholoday 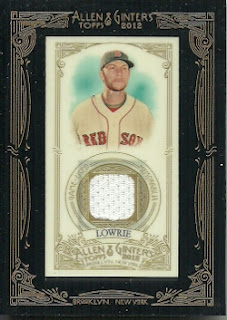 Another of those long overdue trade posts. This time the trade was with Matt from DocHoloday.com.  Matt lists amongst his likes, baseball, bowling shirts, fedoras and the Boston Red Sox, to name few. For a more detailed listing check out his DocHoloday website. Unfortunately listed amongst his dislikes is 'Soccer' .
In reply to this bunch of Red Sox I sent his way, was a box of complete or near-complete sets of Red Sox cards from the past few years. It is so nice to clear so many cards off the wants list in one big trade. Great stuff Matt.
He also included a fine stack of  Kimball Champion cards, a set which I am finding annoyingly difficult to complete.
Great trade Matt, Thank you. Good to see The Doctor was a welcome addition too. 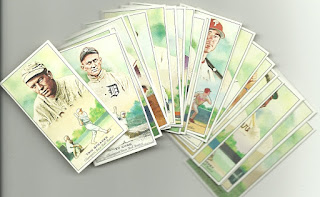 Trade with Angels in Order 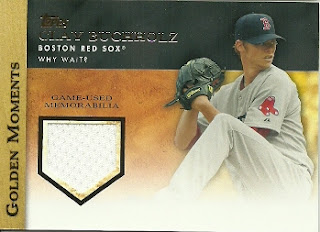 This is long overdue Thank you post to Tom from The Angels, in Order. When trade packages went out last month, he was he first to send cards back my way. A great stack of Red Sox that included the two game used relics shown.
Despite the revelations that 'authentic game used' relics could be anything but, some speculation about table cloths, tea towels and handkerchiefs, in the back of my mind there is hope that The Big Papi did in fact hit a homer with this tiny shard of bat.
Please keep the David Ortiz wood comments to yourself, 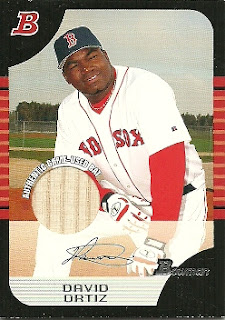 On a different note. There was a programme on ITV, a UK television channel, the other night about Liverpool Football Club. A section of the show was about a visit they made to Fenway Park to meet the Boston Red Sox earlier in the season. Apparently they made the trek all the way to the US to find inspiration from the Red Sox. Big Papi, Adrian Gonzalez, Cody Ross, Pedro Ciriaco and Bobby Valentine featured. Bobby Valentine and Brendan Rodgers exchanged shirts. Adrian Gonzalez spoke to a some shocked Liverpool players about the numbers of games baseball players have in a week and how few breaks they have during the season. Believe it or not his conversation was subtitled in the programme.
Posted by jackplumstead at 22:31 No comments: 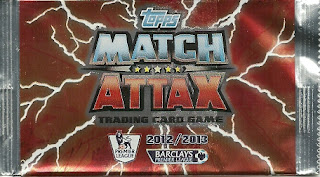 For those of you who are interested 2012-2013 Match Attax Football go on sale on Thursday 27th September. These cards are from a preview pack available with Match of the Day magazine. 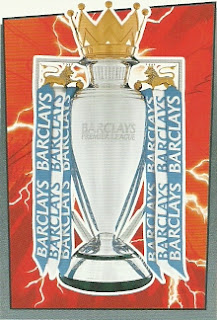 There are over 500 cards to collect including new Stadium cards, Super Skills, Star Signings, plus Legends, 100 club and Man of the Match cards.
There will also be some Limited Edition cards available in magazines and various accessories but are yet to be revealed. 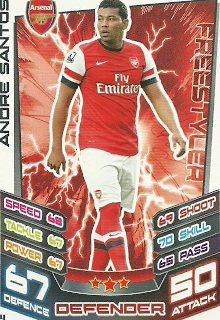 What can you do with Eight Cliff Johnson's? 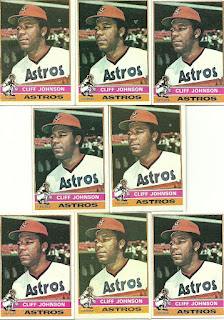 In a recent ebayUK purchase I was the lucky winner of some 1976 and 1973 Topps cards. The comment did say there was 'some' duplication. The seller was kind enough to include a neat little stack of unexpected 1979 Topps as well.
But seriously what do you do with 8 Cliff Johnson's beside make up your own 12 days of Christmas rhyme?

Posted by jackplumstead at 22:03 2 comments: 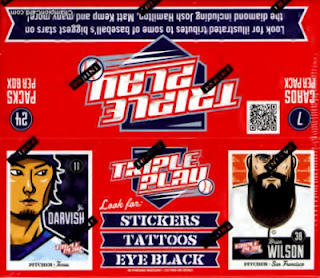 When this set first appeared on Panini's web-site, I have reluctantly got to say it was love at first sight. Sad but I had to get my hands not just a few packs but a box of the stuff.
As I mentioned in an earlier post, I have been in contact with PaniniUK and Panini Europe about obtaining Triple Play. Their professional suggestion was to get in contact with 'someone' in the US, who might deliver to the UK.
Grudgingly I purchased a box of 24 packs of Panini Triple Play from Dave and Allen's Card World.
Price of Box $24.00
Price of Delivery $24.00. Like hell it costs $24.00 but I'm not going to quibble just yet.
Import and Customs £6.91 ($11.00).

You see Dave and Allen say the value of the item includes the postage cost, so Customs and bloody Excise don't just charge you for the item, they add the postage costs as well. I can feel myself getting a little hot under the collar but it's not entirely Custom and Excise fault,its my own fault, although some of the blame has to rest with dacards because instead of using the USPostal system and Royal Mail, they plump for UPS.
UPS a private company then charges me £11.00 to deliver my goods that have already been paid for once.
UPS Brokerage Surcharge £11.00  ($17.60)

Let me just say I am going to eke these cards for a little while. Please be patient.
Posted by jackplumstead at 21:07 3 comments: 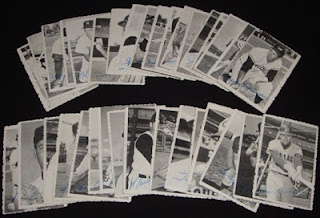 Placed within the 1969 Topps sets was an insert called Deckle Edge.
The 1969 Deckle Edge inserts include 33 black-and-white cards and features scalloped borders. The cards measure 2 ¼” by 3 ¼”. 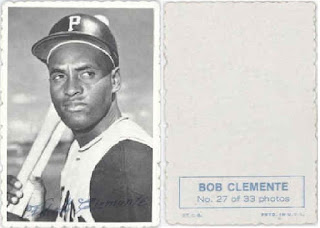 The card fronts have a black and white photograph with each player’s facsimile autograph. The reverse includes the card number and player name in a small blue rectangular box.
There were two variation of the same numbered card;
Number 11 which can be either Hoyt Wilhelm or Jim Wynn, and
Number 22 with either Rusty Staub or Joe Foy.
There are 33 cards in the set;

Trying to collect them all.

Featured within the 2012 Topps Archives were throwbacks to the 1969 Deckle Edge inserts
There were 15 cards within the series;

Hey why not try and collect all of these too.

Posted by jackplumstead at 19:47 No comments: