Trade with Justin from Is this a Wasteland?

Some cards we like instantly, others we push to side and think 'What the...?' The above card, an insert in the 2003 Topps set, was one of those cards that I instantly liked and it wasn't shiny. I have been able to gather a few these Red and Blue Backs fashioned after the 1951 Topps set but this one of Pedro I didn't have. Justin from Is this a Wasteland.. included it in a package I received amidst postage turmoil here in the UK. Justin also enclosed another guilty pleasure, unopened packs. 5 2007 Fleer Ultra packs, which I will bust in my search for Red Sox.
Also included in the package from Largo Florida were:

An excellent assortment of Rookies, inserts and a numbered gold parallel. As always Justin -its great to trade.

Posted by jackplumstead at 20:53 No comments:

Labels: Bay Rays, Is this a Wasteland, Justin, Trade

Trade with Ed from Roll out the Barrel

The postal workers of the United Kingdom were 'on strike' for two days this week, so I was surprised to receive not one, but two packages from the US. These arrived like book-ends on either side of the strike while very little else did. Amazingly however credit card applications and bills managed to be delivered as well. These along with coackroaches, it is rumoured, will survive a nuclear attack.
Another interesting fact that has emerged during all this -is that it takes between three and four weeks to clear two days of back logged post.
Firstly the package from Ed at Roll Out the Barrel and what a beauty it was. A game used bat, two Jacobys and my first taste of Goodwins Champions. The Goodwins have received mixed reviews around the blogs. Comments such as: dubious quality, multiplication in packs, Evil Lincoln, Topps did it better in A+G and so on. I liked them and the Jacoby mini is superb although a little spooky...
Here is the rest the package from Hartland Wisconsin;
1982 Fleer Boston Logo sticker
2004 Leaf #PTT 266 Pedro Martinez
2005 Topps #UH151 JohnnyDamon
2006 Flair Showcase #50 Curt Schilling
2008 Stadium Club #55 Dustin Pedroia
2008 Stadium Club #19 Jed Lowrie
2008 UD Timelines #226 Clay Buchholz
2008UD Timelines Mayo #136 Davis Ortiz
2008 UD Timelines Mayo #168 Daisuke Matsuzaka
2008 Upper Deck X #15 Josh Beckett die-cut
2008 Upper Deck X #16 Clay Buchholz die-cut
2008 Upper Deck X #X-JB Josh Beckett
2009 A+G #7 John Smoltz
2009 A+G #11 Jacoby Ellsbury
2009 A+G #29 Jonathan Papelbon
2009 A+G #119 Kevin Youkilis
2009 A+G #215 Jed Lowrie
2009 A+G #291 Josh Beckett
2009 A+G #348 Justin Masterson
2009 Bowman #20 Josh Beckett
2009 Bowman #38 Dustin Pedroia
2009 Goodwins Champions #3 Jon Lester
2009 Goodwins Champions #23 Kevin Youkilis
2009 Goodwins Champions #78 Jason Varitek
2009 Goodwins Campions #225 Jacoby Ellsbury mini black border
2009 Icons #61 Jon Lester
2009 OPC #192 Hideki Okajima
2009 OPC #550 Jonathan Papelbon
2009 OPC #577 George Kottaras
2009 Topps #77 Jon Lester
2009 Topps #CBR-BRA Rocco Baldelli relic
2009 Topps Chrome #31 Kevin Youkilis
2009 Topps Chrome #110 Jonathan Papelbon
Thank you Ed. Superb cards once again.

Posted by jackplumstead at 20:57 No comments:

There are a few readers out there who have, in the past, shown an interest in these cards, mainly for the American born players and a few who support a particular English club.
For the third year running Topps have released the 'Match Attax Trading Card Game' series of collectible cards. For the past two years Topps has seen unprecedented popularity for this set, mainly in the UK. This year, however, they have decided to go global. Whether that means these cards will be available in the US or Canada I am not sure but they are advertising swap and play events in Malaysia, Singapore, South Africa and Australia.
The presentation of the cards has changed very little;
There are 444 cards to collect, 425 last year,
There are 6 cards per packet,
The predominate colour for this years set is orange, rather than the blue Topps has used for the last two years,
Inserts include Man of the Match and 100 Club 'rainbow' foils,
New Inserts included this year are manager cards and i-cards (similar to the Topps Attax baseball) with redemption codes,
There are 100 Theo Walcott (Arsenal) and 1000 Shey Given (Manchester City) autographs inserted into LUCKY packs,
There are 7 Limited Edition cards available in starter packs, collectors tins, collectors guides and available in some football related magazines for a short time. Interestingly two stores are also giving away limited edition cards (while stocks last, naturally).

If you have come this far, you are either a football fan or have an insatiable curiosity.
Drop me a message if you would like some of these packs and they will happily find their way to you. I will also throw in the Collectors Guide.

Posted by jackplumstead at 21:06 4 comments: 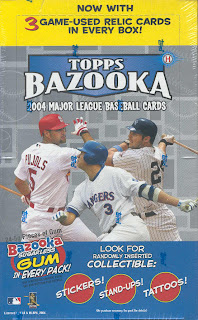 It is vary rare that this happens, so when this particular item, a whole box of cards-24 packs! of 2004 Topps Bazooka , appeared on e-bayUK I was fairly determined to acquire it.
And acquire it I did.
Odd thing though was that it didn't rise higher than my initial bid. Considering the rarity of such an item I presumed that it would go higher.
Each 2004 Topps Bazooka Baseball sealed box contains 24 packs (each pack including one sugarless slice of bubble gum) of 8 cards each in a 330 card base set. The base set is 300 cards with 30 cards being printed in 2 variations. Each box will contain THREE Memorabilia cards. Parallel sets: Minis 1:1 and Red Chunks 1:1. Inserts: Tattoos 1:4 - 4-on-1 Stickers 1:4 - Comics 1:4 - Stand-Ups 1:8 - and Relics Memorabilia cards 1:8 (Blasts > Game Used Bats #'d to 25; Adventures, Game Worn Jerseys #'d to 25; and One Liners Retired Game Worn Jerseys - #'d to 25).
This appeared to be an underrated set. The target demographics being children.
I have opened all the packs in 4 stages. I hesitated at opening them all in one go. Trying desperately to 'eek' this out for as long as I could stand.
From the 24 packs I pulled:

118 base cards, 3 doubles (39% of the set), although this caused some initial confusion as some of the cards are printed with two different images on the front. There were 3 cards with both variations in this box.

and the following inserts:

5 Stand-ups (1 double)
and finally 2 Game -used Relic cards, although the box specifically states that there would be 3 in every box. Is 5 years too late to complain to Topps? 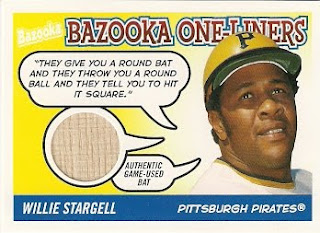 Bazooka Adventures #BA-AR2 Alex Rodriguez
My initial reaction is one of excitement as it is a novelty to actually open a full box of baseball cards. Overall as a collector I am pleased with the selection. Inserting only 5 base cards out of 8 may not be the ideal way for set collectors, however it adds to the uniqueness of the product.
Posted by jackplumstead at 13:01 1 comment: 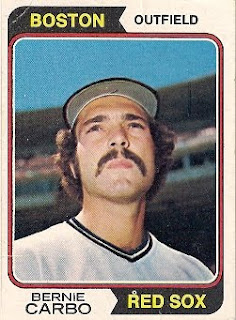 One of the more regular trading buddies I have is fellow Red Sox collector Adam. His blog Thoughts and Sox puts mine in the shade. However, he is willing to clear some numbers from my wants list if I am able to clear some from his. A great stack of about 60 Red Sox cards arrived a few weeks ago reducing the list.
Then I realised as I was writing this post that it would mark the 12month anniversary of my first trade with a US resident.
Tribecards posted about our trade on the 4th October 2008 and he was the first collector to sent cards back. I had posted off cards to Thorzul and Steve at White Sox cards and soccer cards to readers of 'A Pack a Day'. These blogs would quench my thirst for baseball cards and I wanted to contribute somehow. At the time I thought there would be no interest in 'swapping' cards with a Gent from Kent. How wrong I was to be.
The trade with Tribecards was quickly followed by ones with NightOwl, Orioles card 'O' the day and then Steve at White Sox Cards. Many, MANY more were to follow. I have posted an abundance of card packages and acquired a multitude of cards. This wasn't, however the most important outcome of trading.
Besides getting to know our postman on first name terms and becoming friends with the ladies who work in the post office, I have made some good friends in the US. I will probably never meet any of them face to face but the generosity and kindness they have shown a fellow collector in the UK cannot be faulted.
And this is what card collecting and trading is all about.
Thank you, all of you who have taken the time to send a package to the UK. 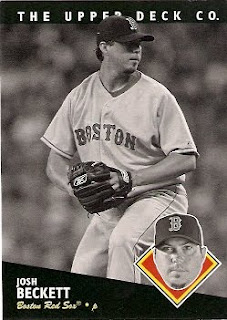