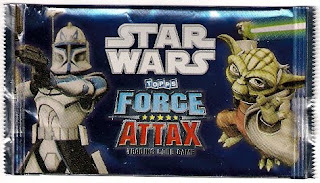 Police Academy was a fine product of the 1980's. The first was the best, the second pretty funny but they should have stopped there. Three was stupid, four even worse. Then Steve Guttenburg decided enough was enough and jumped ship after the fourth instalment. They continued to squeeze that winning franchise until it bled...5th, 6th, Mission to Moscow (7th), TV series, Dog Academy and there is talk of an 8th with Steve Guttenburg safely rescued and back at the helm. Topps, I fear, is squeezing as much as possible from the Attax brand:
Premiership Match Attax (4 series)
Bundesliga Match Attax (2 series)
Slam Attax (2 series)
Match Attax Extra (4 series)
Match Attax World Cup edition (1 series)
Baseball Attax (2 series)
NFL Attax (?)
Basketball Attax(?)
and now Force Attax.
When I saw these I thought why, but that little Star Wars nerd that resides inside me bought four packs. My boys, who pay no attention whatsoever to any of my other collecting pursuits, saw them and without hesitation 'awwed' and 'arred' over them. So in this respect a success for Topps and the continuing Attax brand. Unfortunately they are not the original Star Wars (I mean episode 4, 5 and 6) but the more recent animated series 'Clone Wars'.
If you are familiar with the Topps Attax cards, you will know they are used as a game. Each card has a defence and attack number. There are 190 cards in the Force Attax set to collect, the usual special insert foils are available -Star foils and Force Master rainbow foils and an album with pocket pages, game mat and checklist also available.
I retrieved the four packs from my sons to give you a taste and share the Star Wars goodness enclosed within.
Pack 1:
Y-wing Starfighter
General Grevious Starfighter
Clone Trooper
Clone Trooper Denal
Count Dooku Star Foil 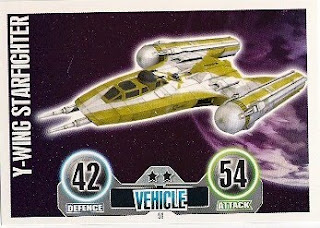 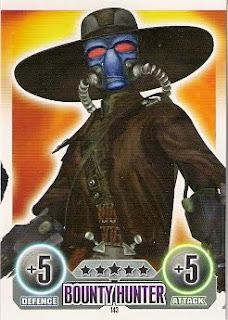 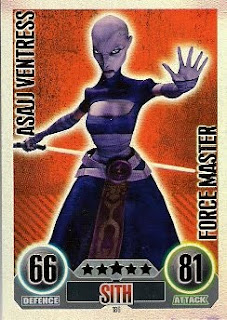 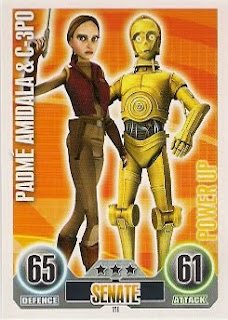 Some great looking cards that we have come to expect from the Attax brand. The Obi-Wan / Anakin card my personal favourite.

Where will the Topps Attax brand go next?
What Attax cards would you like to see Topps produce? 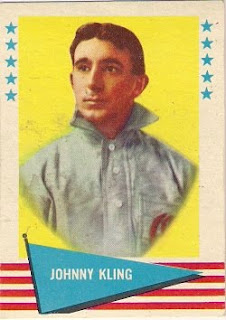 The 1961 Fleer Baseball Greats is an unappreciated set of cards. I love them for their simple design and their underdog status. I would like to think that I will be at a stage in my collecting habits, when I have completed some of my other baseball pursuits, attempt to collect a unique set such as '61 Fleer. Considering the set includes such names as Ty Cobb, Lou Gehrig, Babe Ruth, Cy Young and Honus Wagner, presumably because Topps had the current players under contract, it is possible.
The complete set is 154 cards and are numbered in 'alphabetical ' order. The set was issued in 2 series; cards #1 to #88 in the first series and #89 to #154 in the second. The first series packs contained team and pennant stickers showing past World Series winners. The Fleer Sticker Project shows both these superb stickers in their glory.
I already have 9 of the '61 Fleer set and this card #52 John Kling is a great addition.
Posted by jackplumstead at 18:22 1 comment: 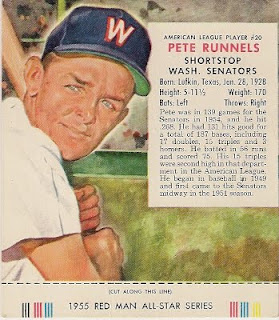 Chewing Tobacco conjures images of the Wild West, spittoons and Back to the Future. I believed that 'smokeless tobacco' was a thing of the past. How wrong I was. In seeking some information on the Red Man brand I discovered that chewing (and spitting!) is still widely practiced.
Baseball cards had not been included in Tobacco products since 1920, until 1952 when Red Man issued a set of cards, attractive big cards measuring 9cm (3.5 in) by 9cm with a 1cm (0.5in) stub at the bottom. The stub could be removed from the card and 50 stubs exchanged for a Big League Baseball cap in the team of your choosing.
Red Man chose to keep all the baseball information on the front of the card and use the back to advertise their product. For four years, 1952 to 1955, Red Man included baseball cards in their chewing tobacco. If you want to drool a little bit at a amazing collection of the entire 4 year run take a look at this blog.
The 1955 set included 25 players from the American League and 25 from the National League.
I was able to purchase this card #20 Pete Runnels Washington Senators with the stub. Unfortunately the cap offer expired on June 15th 1956.
Red Man tobacco products are still available( in only the top quality stores naturally ) but baseball cards have been replaced by fishing lures.
Posted by jackplumstead at 21:24 6 comments: 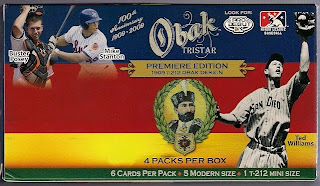 I was fortunate recently to get hold of a 'blaster' of 2010 Obak. Blaster may be stretching it a little, as most of the box contained a large L-shaped block of foam. There are 4 packs within the blaster, each pack containing 6 cards.
The base set consists of 119 cards, 5 of which can only be collected through Tristar Prospect Plus packs. I don't really know enough about Minor League ball to speak confidently about the cards but I like the modern/vintage sets. 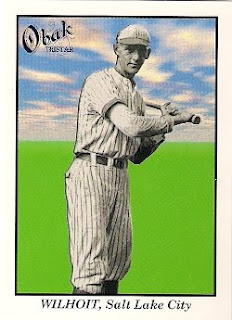 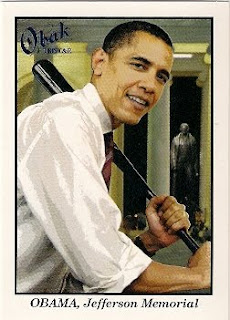 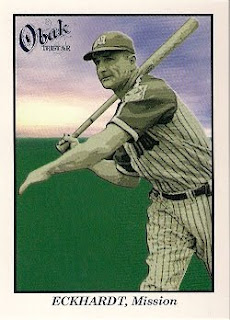 Hooked ! Mainly by the names of the players and teams. I have to get some more 'Loudermilk' cards as well as Bristol Twins. Pity the team isn't called Bristol City Twins.
As usual all the cards are up for trade.
Posted by jackplumstead at 19:54 2 comments:

What will 99p buy you in baseball cards? 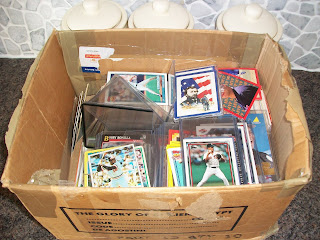 A load of crap possibly.
Readers from the UK might have seen this lot on e-bay recently. A 1000 cards with a starting price of 99p. Who wouldn't bid? Well everyone obviously because I won with a bid of 99p.

So what exactly did I get for my 99p? 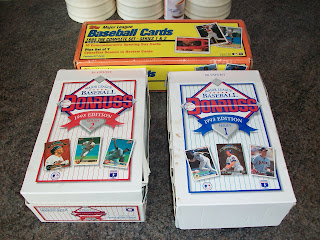 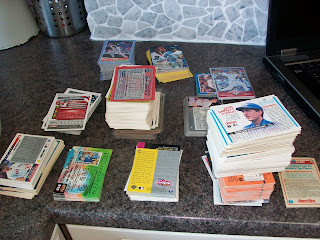 That is the bulk of the cards. An unusual mix considering there is two complete sets, possibly three, and the ever popular early 1990's cards, that appear to be common all over the world! There was also about 20 top loaders, a packet of card protectors and roughly 20 hard cases too.

There was a number of unusual items enclosed, hidden deep within the box. 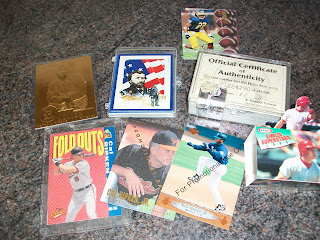 Is there method to the madness of this collector? There are very few Red Sox, Pirates or Dodgers cards but plenty of White Sox pretty much together in a pile and Yankees cards again together. There are a number of cards badly beaten but in top loaders, a few more cards covered in sticky back plastic (for protection?) and a number of others that look as though they have been used to soak up low grade oil. 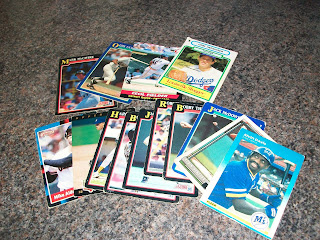 So a load of crap then?
Posted by jackplumstead at 19:22 6 comments:

Trade with Chris from the Call of Cardboard 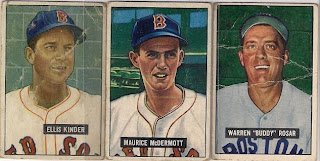 Trading has been the backbone of my blog ever since I trying to secure the last few cards of the 1980's Topps set. Things have changed, there are well over three to four times as many blogs and I have been losing out on trades to some bigger (and closer) Red Sox collectors. So it was a welcome relief to be contacted by a few collectors recently interested in a Red Sox trade. This trade with Chris from The Call of Cardboard was completed a few weeks ago.

We originally made contact in regard to 2009 Goodwin Champions, as we are both attempting to collect the base set and it grew from there. Chris received my selection of cards and sent back a big selection of Red Sox from the 1970's and a large pile of Goodwins to check off the wants list.
To my surprise tucked away amongst the cards were the three 1951 Bowman cards shown above. Unexpected and greatly appreciated.
The '51 and '52 Bowman sets are rapidly pushing out the 1980 Topps as my favourite set of baseball cards. As I have said before I prefer the 50's Bowmans to 50's Topps.
Thanks to Chris for the 'awesome' trade. 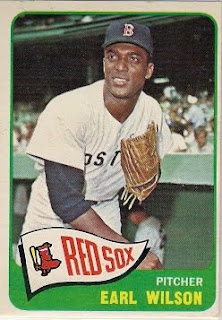 Posted by jackplumstead at 21:42 3 comments: