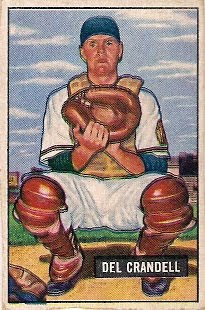 In 1950 the Bowman Gum Company of Philadelphia were the only company to release a national baseball card set. The 1950 Bowman set included 252 cards and the cards measured 5.2cm x 6.4cm (2-1/16in by 2-1/2in). The front of the cards featured hand-painted color reproductions of actual black and white photographs.
In 1951 a similar style was used, hand-painted colour reproductions of black and white photographs, some of the 1950 images were reused on the 1951 card set. But Bowman increased the size of the cards to 5.2cm x 7.9cm ( 2-1/16in by 3-1/8in) and increased the number of cards to 324. This was the biggest set of baseball cards at the time.
In 1950 Bowman had a monopoly, but in 1951 Topps entered the baseball card market with their 52 card blue back, 52 card red back playing card game.
The two most desired cards from the 1951 Bowman set are the rookie cards of Mickey Mantle #253 and Willie Mays #305, both of which are horizontal cards. Mantle wasn't included in the 1951 Topps set, he had to wait until the following year for his Topps debut. Some notable omissions from the 1951 set were Joe DiMaggio, Stan Musial and Jackie Robinson.
I really like the Bowman sets from the 1950's. With some fear of being shunned by the baseball collecting fraternity, I prefer the Bowman cards over the Topps from this era. That is until 1955 when Bowman ceased to produced baseball cards. 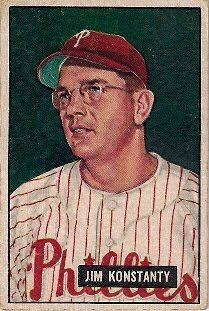 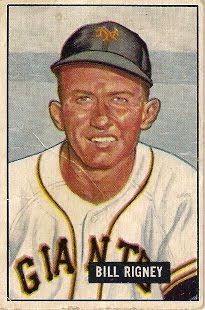 As an added bonus the seller added these two 1957 Topps 'football' cards, not in any great condition but the design is lovely. I am not a collector of football, so if someone can give them a good home it would be appreciated. 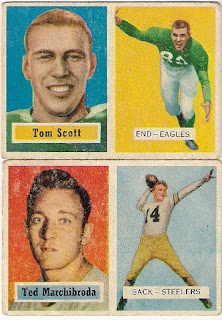 Posted by jackplumstead at 20:46 3 comments:

What baseball cards are these? 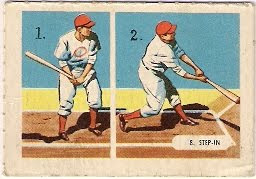 Although I haven't written for a few weeks, I have still been purchasing baseball cards and the draft posts are now starting to pile up.

I bid on what I thought was Dover Reprints of Goudey, Playball and Diamond Stars. Included in this eclectic mix were three cards that I presumed were European origin but searching has left me a little more confused.

This little card comes from a Dutch company, no not a card company, but a foodstore Hema, which started in the 1920's in the Netherlands. I know that the Lucifer Brand was matches and these little labels (as it measures 2cm x 3cm) were include in a matchbox. I have been able to find an odd assortment of flowers, cards, trains, picturesque scenes and discovered that this particular label was from a sports series. The other sports included soccer, boxing and athletics but not any 'American' sports. But that is about it. No date of issue or collectablity. 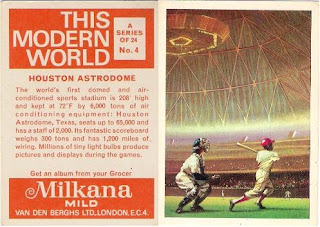 Next is this card from series called 'This Modern World' produced by a German company called Milkana. It's still around and a search reveals more cheeses than I am comfortably able to comprehend. What is confusing is the London address and the suggestion that an album is obtainable from your grocer. The Houston Astrodome must have been an engineering marvel when it was finished in 1964, so I am guessing a date around then but what other cards were in the set remains another mystery. 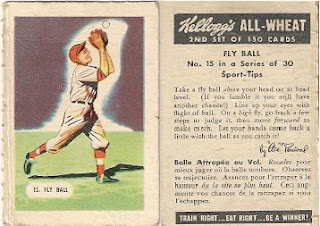 The third and fourth cards are my favourite. At first I thought of the European market because of the dual French/English. Big B might be able to help with these, as they are actually Canadian and were released in 1945. I found this picture while searching, which shows that the cards came in strips of 4, in the Kellogg's cereal. 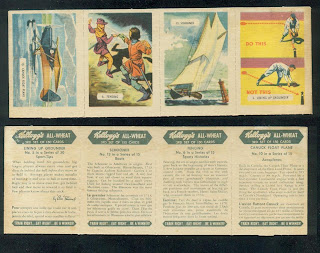 This particular strip shows an interesting combination of aircraft, fencing, yachting and baseball. The two cards I have, come from the 2nd Series of 30 cards both have a perforated edge on the left side, so that fits with this set above.

Any information or pointing in the right direction will be greatly appreciated. 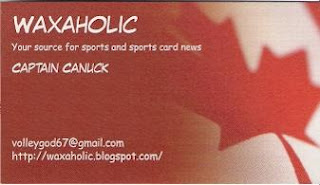 Firstly, very impressed with the 'calling card'. I feel as if I'm dealing with a real professional. Waxaholic has now become my most prolific trading partner. We have been trading packages across the Atlanic for almost 2 years. Sorry it has taken so long to get this posted as well.
Brian sent along some, dare I say 'vintage' 1974 Topps 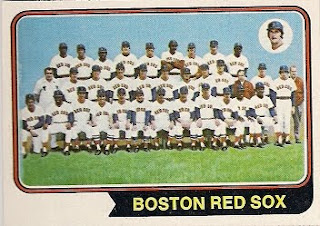 and some equally sweet 1976 Topps. 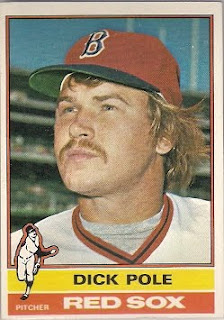 Thanks again Big B. I search in earnest to clear you 'soccer' wants list.

Posted by jackplumstead at 14:31 2 comments: 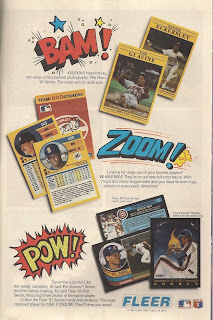 It falls upon us every year, when we realise that we have just too much 'stuff'. The 'stuff' is usually mine and when I talk about 'we', I mean my wife she thinks that I have too much stuff. I'm not sure it is actually possible to have too much, maybe the wrong sort, but not too much.
The upshot is that some of it has to go. While clearing out the loft, I stumbled across a cardboard box full of comic books. I thought I had cleared them all out quite a way back but it looks as if I had squirreled away some for a rainy afternoon (or several looking at the size of the box). I must have been picky as I only kept the Batmans, some Dark Horse, a few John Byrnes and the complete set of a series that I loved called 'The Nam'(all 87 issues). Clearing stuff had to wait while I carefully removed each comic from its Mylar sleeping bag and read through in the peace and relative darkness of my loft. Buy issue 10 of 'The Nam', the realisation had dawned that I was AWOL, by issue 20 I decided to bring the whole box down and read them all again.
I started to become a little fascinated by the changing face of advertising. Issue #1 of 'The Nam' series was published in December 1986, the advertisements consisted of M&M's, Laser Tag, chocolate bars and Dungeons and Dragons. Issue #10 in late 1987, the Nintendo Entertainment System (NES) was being advertised and what a sweet thing it was too. By Issue 20 (July 1988) game technology was the staple of comic advertising, Konami games in particular.
By Issue 30(April 1989) technology was still the big advertiser; Quickshot joysticks, Pacman and F.I.S.T fantasy role play via a touchtone telephone. By Issue 40 (January 1990)there was nothing other than Konami hand held games and Nintendo games such as Double Dragon II. However Gameboy made an appearance in July 1990 and in September 1990, the Sega Genesis!. By Issue 50 (November 1990) technology had made way for cardboard, NBA Hoops and Collect-a-Books NFL cards were advertised regularly.
Then in April 1991 (issue #55) -Fleer 1990

"hard hitting, non-stop action packed photographs. The most radical cards
ever! Logo stickers in every pack. Awesome. Bam, Zoom ,Pow. These cards will
blow you away!"

You cannot fault Fleer's optimistic approach.
Score advertised in the same comic, but they were not as eager to sell their product as Fleer was. Hoping that 'Being the best in baseball' and 'Mickey Mantle' would do the talking for them. They also claimed to be the official card of the 1990's. 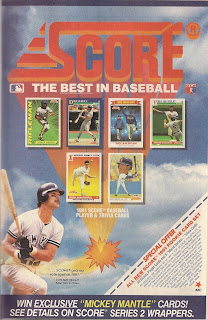 Not to be outdone, in the next issue, Upper Deck went for a full double page spread. Extolling the virtues of 2500 Nolan Ryan signed cards inserted randomly into tamper proof packs. "Just buy one pack and you'll discover why Upper Deck is called 'The Collectors Choice'." 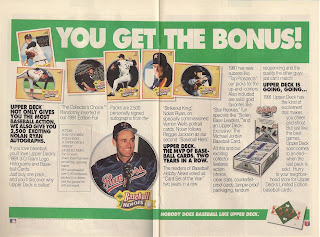 By Issue #60 (September 1991) baseball cards were no longer being advertised leaving space for Super Heroes, Star Trek and Terminator cards all produced by the Impel brand. Football and Hockey cards produced by Fleer and Score continued to feature however.
Topps didn't advertise once in these Marvel publications presumably they saw little threat in these young upstarts with their fancy gimmicks and never ending supply of inserts.
Years of experience and patience were Topps virtue, as all these brands will have gone the way of the Do-do in another 10 years or so. Ahh Topps you wonderful monopoly.
Just the Dark Horse Presents to plough through now.
Posted by jackplumstead at 15:30 No comments: 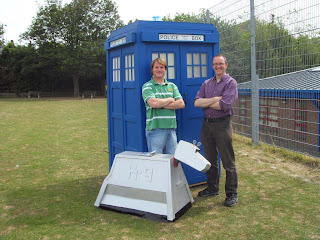 Every year my friend, and fellow teacher, Dion and I make a Dr Who movie with the children at school. We make our own props (the Tardis is in need of some repairs-tumbling through time and space takes its toll).
This year K-9 makes a very important appearance, hence the inclusion in the picture. We have a regeneration sequence included, as our Doctor of the last two years moved onto secondary school.
The children enjoy making it (and so do Dion and I)but it does take most of the waking and some sleeping hours.
It's well worth it...in the end.
Posted by jackplumstead at 22:12 1 comment: