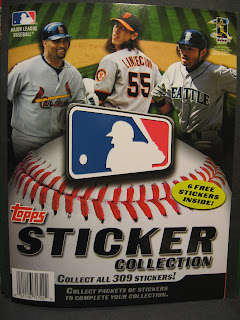 It has only taken about 3 months and I am behind most other collectors of this set. But I can now hold my head up in pride, as I have finally obtained the 2011 Topps baseball sticker album and some stickers(7 packets to be exact).
My first perusal of the album threw me a little. For a split second I thought that the stickers were not in numerical order, slight little panic and then realised the numbers shown were shirt numbers...phew.
The stickers are in numerical order, a page devoted to each MLB team and there are 309 stickers in total to collect. This includes 30 team logos and 9 legends. The centre pages are dedicated to the 30 team logos and the back inside page the 9 legends.

The sticker packets are not what I have come to expect of stickers. In the UK most stickers come in a paper packets sealed along all four edges. Often in haste to retrieve the contents, opening the packets can cause the stickers to be ripped. Which can be annoying if it is the one sticker you are after. These packets are more like baseball card packs.
The stickers themselves are incredibly strudy and very unlike football (soccer) stickers which come backed on flimsy paper. I can only guess that this is to cater to the collectors who will choose the 'no stick' option and store them similar to cards.
Then a slight conundrum dawns- to stick or not to stick.
Before you waste your answer, I have taken the advice of  Topps themselves and 'started peeling those stickers.'
I will also chronicle the steps towards completing the whole album here at 2011 Topps Baseball Sticker Album. 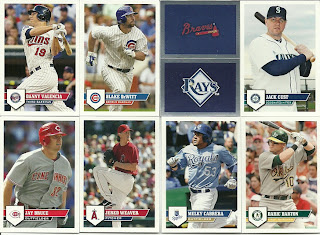 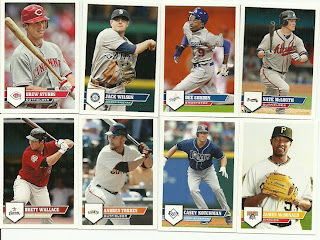 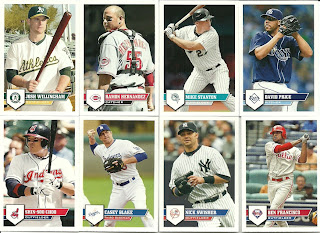 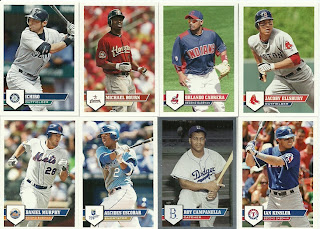 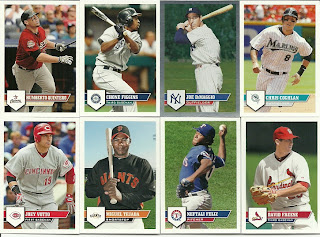 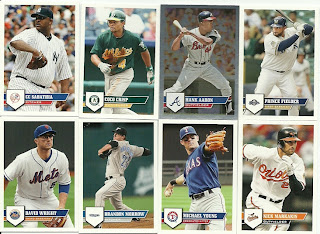 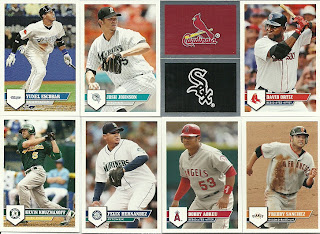 Looking forward to collecting the whole lot.
Posted by jackplumstead at 22:07 1 comment:

Gift from Mark, the Mayor of Porthleven 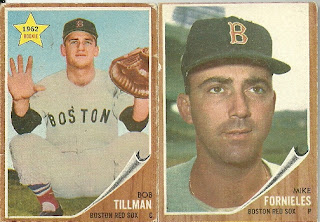 Mark has been dropping in on this blog since I started back in 2008. He was draw to a post about TTM autographs when I was about to embark on a ambitious task of getting Jacoby Ellsbury to sign some Allen+Ginter cards. He offered advise from his years of experience in collecting autographs. The cards have never returned but thus begun a friendship of story swapping about his autograph hunting and general baseball.
Mark has also embarked on a number of trips across the Atlantic to see actual baseball games. I'm sure that is not the objective of his family holiday, but he has seen alot of baseball. After every trip he gifts me a number of items including books and cards. Mark knows that I like the details and photographs of where he has been, the autographs he has collected and who he saw. His son is paid-up member of Pawsox Kid's club and I am always amazed how well the baseball clubs look after the younger and future baseball fans.
Mark recently returned from a transatlantic holiday and a package arrived with some Red Sox cards. He carefully detailed exactly where he had obtained the cards. He also added that the cards might make me feel better. What could he possibly mean?
From Don's Sportscards in Portland he purchased these vintage Red Sox:
1962 Topps #368 Bob Tillman
1962 Topps #512 Mike Fornieles
1962 Topps#542 Dave Philley
1963 Topps #28 Mike Fornieles
1964 Topps #305 Jack Lamabe
1964 Topps #352 Ed Bressoud
1966 Topps #502 Lenny Green
Don also threw in a set of these 2011 Topps Prime 9 Redemption cards which were only available through hobby stores. 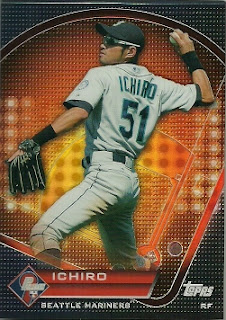 The third and final item from Mark was a pack of 2010 Allen and Ginter, although I am trying to collect the 2010 set of A+G, that is not what makes this pack interesting. It was in fact purchased from the Yawkey Way Store, which is directly opposite Fenway Pack. This may not seem exciting to regular attendees but for a guy sitting in Westgate-on-Sea in the UK it most definitely is. 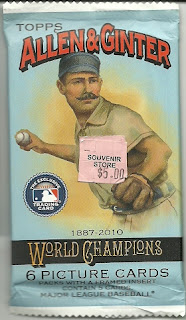 Thank you Mark for thinking of a Red Sox fan during your holidays.
Posted by jackplumstead at 21:55 No comments:

Another pile of baseball cards 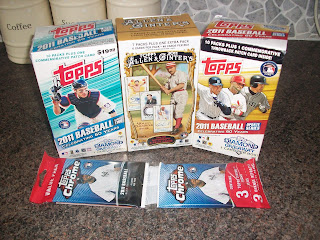 The head of my school returned from another short break holiday to the USA. It would appear that this will be the last trip, as they have sold their house in Florida. My first thought was for them ... obviously. The occasional baseball packet haul was nice while it lasted.
I have been the lucky recipient over the last few years of numerous blasters and loose packs. Their recent trip was interrupted by a freak snow storm which grounded planes across the East Coast. Once again their delay is my windfall. Nothing will ever compare to the Icelandic Volcano delay of a few weeks, however the three day delay meant more cards for me.
This trip I received:

1 blaster of 2011 Topps Series 2
1 blaster of 2011 Allen+Ginter
1 blaster of 2011 Topps Update
and a rack pack of Topps Chrome
The one thing I actually asked for was the 2011 Topps baseball sticker album and some stickers. Unfortunately they searched high and low and were unable to find any. Are they that rare or have I missed the boat on this?
I will be opening these packs on Pursuit of Red Sox over the coming weeks.
Posted by jackplumstead at 21:56 3 comments:

Trade with The Cardboard Junkie 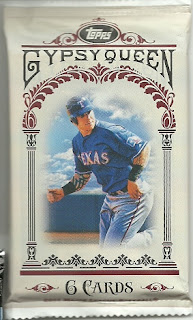 One of the many quirks I have developed in collecting baseball cards is keeping the wrappers. Not just the wrappers but the boxes also. Before blogging came about I wrote the players pulled from packs and kept the wrappers along with the scrawling in a notebook.
Fast forward a few years and I still do this but in the guise of Pursuit of Red Sox. An attempt to keep an accurate record of the cards pulled from packs and an easier way of keeping track of the Red Sox pulled from packs.
To further the cause Dayf recently proposed a intriguing hostage relocation program. English football (soccer) packs for American baseball packs. Serious transatlantic negotiations began and finally winging their way to Georgia were some packs of 2010 Adrenalyn XL World Cup cards. Luckily my local newsagents still carried some stock. So I bought what was left and the hostages were released from English tyranny.
Relocating to England these former abductees were sent by Dayf:
2 packs of 2011 Gypsy Queen,
1 pack 2011 Allen & Ginter's,
1 pack 2011 Topps Opening Day,
1 pack 2011 Topps Attax,
1 pack 2011 Topps baseball Series 2,
1 pack 2008 Donruss Playoff Extra edition.
All of which I intend to open at Pursuit of Red Sox.
Wait a minute. I call foul. Two of the packs have been tampered with. Get Ban Ki-Moon on the phone quickly. Relax......Unclench.......Slow down. The hostages have been treated in accordance with United Nations guidelines.
On further inspection both packs were chock full of Gypsy Queen Red Sox and Topps Red Sox.
Please forgive my accusations. The packs were brilliant. 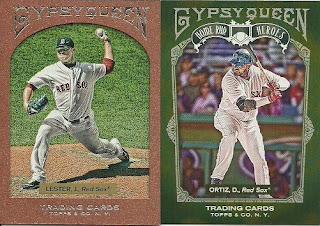 Thank you Dayf. Hopefully we can negotiate additional transactions.
Posted by jackplumstead at 05:15 No comments: 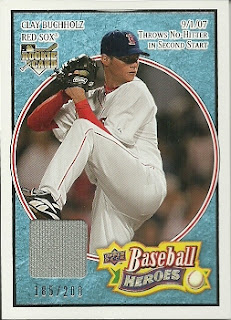 There is plenty of misery in the Red Sox camp, but the ever positive Section 36 has dissected, sew back together and then dissected again to recent failings in the Red Sox franchise. It's no choke (see what I did there), he is a real fan sitting week in, week out, in what he calls the best seats in the Fenway house-Section 36.
Who better to make a Red Sox trade with than a diehard fan and New Hampshire resident. My package of Red Sox made its way to Concord in New Hampshire and before long a Red Sox heavy package arrived in Westgate. 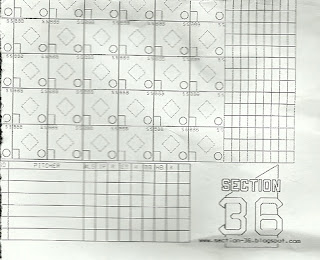 Ron wrote a short message on the back of a baseball score sheet. It is either of his own making or do they give these out at games?  I remember seeing Kevin Coster recording the score in Field of Dreams, at the game where Archibald Graham's statistics flash up onto the screen. I am presuming that it is quite common. Is this correct?.
Thanks to Ron at Section 36. Always nice to trade Red Sox for Red Sox.
Posted by jackplumstead at 19:41 No comments: