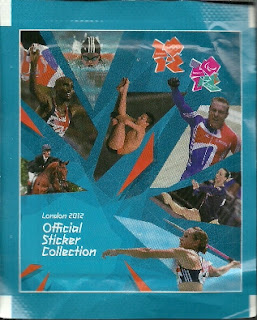 The second Olympic collection is stickers from Panini. Not exclusively UK athletes, but I still cannot bring myself to collect the whole set.
From the official Panini site.

"Panini are proud to announce the launch of their official Sticker Collection for the London 2012 Olympic and Paralympic Games! Packed full of fun facts, stats and imagery, it’s the perfect souvenir guide to the UK’s biggest sporting event this century. Get stuck into this awesome collection and discover info on all the highest profile Team GB and International athletes. The Official London 2012 Sticker Collection will serve as your ultimate guide to the tournament with all of the key dates for each event, venue information, Did You Know flashes and Fun Fact flashes.


There are 444 stickers to collect with 24 kiss-cut stickers and 24 rainbow foil stickers to look out for. So what are you waiting for? Start collecting now"


Not for me thanks. A quick glimpse of some of the stickers available. 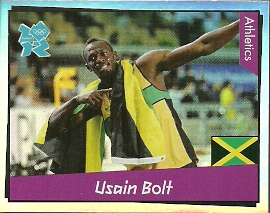 At this present time, the most famous athlete on the planet. Completely mobbed at the opening ceremony by other athletes. 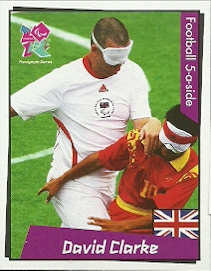 Also featured are some of the Paralympic events. Have you ever tried this? We did blind football, with a preference for the sport being called five-a-side football at school with the children. We also played blind cricket. The ball contains a number of small bells or ball bearings and its is bloody difficult to kick or hit. The children loved playing the game though and it really made them trust each other. I was always tempted to have a quick peek. 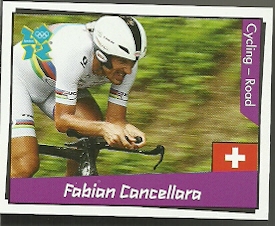 This set contains a number of international sports stars. I have been watching the Tour de France recently and both the men's and women's road races. Amazing how interesting it can be. 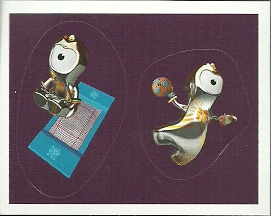 These are the two very strange and slightly scary mascots from the 2012 Olympics called Wenlock and Mandeville.

Posted by jackplumstead at 21:39 No comments: 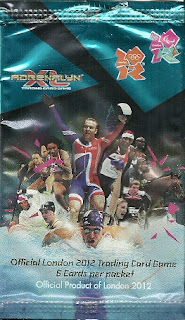 A few cards in honour of the 2012 Olympics, which has just started. We are watching the Olympians arriving in the stadium. There is great speculation about who will light the Olympic flame. The favourite is Sir Steve Redgrave, but other possible contenders are David Beckham, Muhammad Ali, Roger Bannister , even HRH The Queen has had a mention.
There are two sets celebrating the 2012 Olympics available here. This first set is of cards from the Adrenlyn XL series.
There are 350 cards to collect. 250 in the base set. All the cards featured are of UK athletes, I didn't know there was that many. 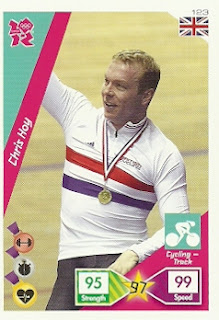 Sir Chris, the cyclist, is actually Scottish but represents the Great Britain team. He won three gold medals at the Beijing games. The first Briton to do so for 100 years. He has been chosen as the flag bearer for the 2012 Olympics. 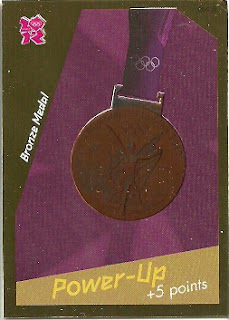 One of the 'shiny' cards available.The Bronze medal. Apparently only located in 1in 50 packs. 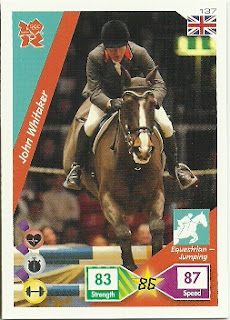 All the sports are covered in this set, even the more obscure ones. I don't think I will be staying up to watch the dressage.Out of the four packets I bought I recognised about 10 names.
Panini also produced a set of stickers, which I will show later.
Enjoy the games.
Posted by jackplumstead at 23:47 No comments: