A super trade with Adam from Thoughts and Sox 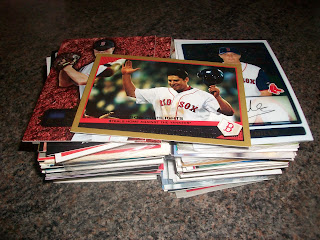 Nothing like a trade to boost the collection and wipe off cards from the wants list. This stack of cards came from Adam E at Thought and Sox in two heavily laden packages last week. Unexpected and greatly received. Thank you Adam. 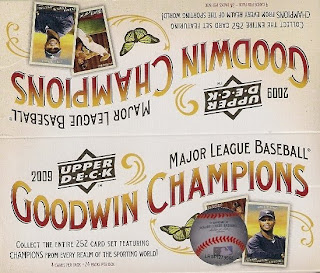 My favourite set from 2009 was Upper Deck's Goodwin Champions. I intend to collect a complete base set of 150 base cards, which doesn't include trying to collect all the short prints. My reason for choosing Goodwins was simple- I liked the design- and I was intrigued by the inclusion of non-baseball related cards, in particular the entomology series. Although the limit of one per case put these firmly out of my reach. There are also a number of 'English' cards available too, in the Citizen of the Day, Citizen of the Century series; Queen Victoria, Winston Churchill, Princess Diana and unbelievably Tony Blair! Bram Stoker too, if I am opting for British cards. Deemed a Major League Baseball set by Upper Deck, however the inclusion of:

'Champions from every realm of the Sporting World'.

put it directly in the 'other' category and not baseball. Most of the inserts were non-sports related- (Landmarks, Entomology, Thoroughbreds, Citizens of the Day, Animal Series, Citizens of the Century), far too many of the 210(including 60 short prints) base cards were from the other realm(46 if my maths is correct), there were too many short printed cards and super short prints, the card stock was poor (made to look like the original set) and therefore many baseball collectors stuck two fingers up at Upper Deck and avoided this set. Add the fact that there were only 4 cards per pack, meaning that a pack could contain; a 2oth Anniversary crap card, a surfer and/or a poker player, an animal and maybe 1 baseball card. This put many baseball collectors off and in these difficult financial times, most plumed for the superior Allen and Ginter outing from Topps. Although many collectors were disappointed with this set, Upper Deck has decided to release another Goodwin Champions in the summer of 2011. Goodwin Champions 2011 preview. I purchased a box with the specific intention of undertaking a video box break. I did record it on a digital camera. It was poor to say the least, but good practice for when I gain the courage to project my voice to the Internet masses. Here is what the video box break would have told you if it was half-way decent. 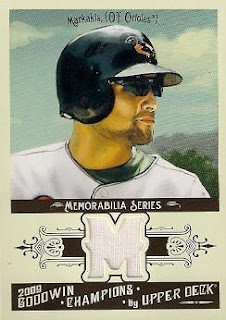 The box should contain 96 cards. The first pack I opened revealed the memorabilia card above, which means only 3 cards in this pack and therefore 95 cards in the box. The breakdown of the rest of the box; 52 base cards (11 non-baseball), 1 memorabilia, 5 short prints, 1 super short print, 2 Citizens of the Day, 7 20th Anniversary rubbish, 5 mini-exclusives, 22 parallel minis (2 Gypsy Queen black borders, 6 non-baseball) 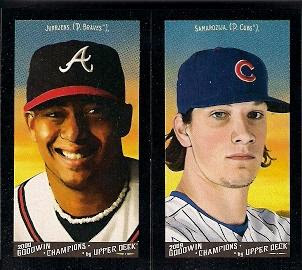 I was able to wipe a fair few off the wants list, leaving 26 left to collect to the complete 150 base set. I would have traded these 7 20th Anniversary cards for 7 more base cards any day. I mean who wants an iceberg card really...anyone? 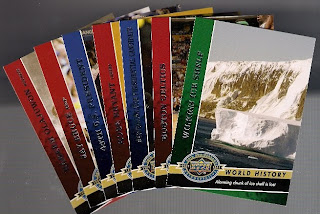 Posted by jackplumstead at 13:02 2 comments:

A quick glance at my Jacoby Ellsbury collection. 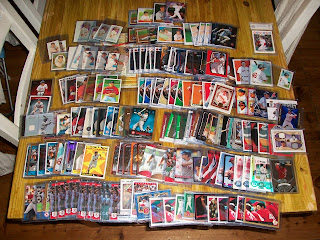 I am taking my 8 year old twin girls on a trip to Australia for a few weeks to spend some time with my parents and the rest of the Arnold clan. The last time they saw them was when they were six months old. It is very exciting and a little nerve racking. That not only means no DIY for three weeks(and our house needs it) but my wife asked me very politely to 'straighten up' all the baseball cards laying around the house. In other words 'you won't be here so put them all away'. One of the many stacks of cards that are 'laying around' is my Jacoby Ellsbury collection. I have been trying to collect all the Ellsbury cards, that have no print run, for about three-four years now and have amassed around 170 cards. So before they disappear into my collecting cupboard, I thought I would sort and Topload them all. Here they are in all their glory.
Posted by jackplumstead at 21:47 3 comments: