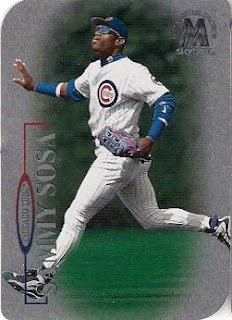 I was watching a number of items from one seller, who was off loading a few cards mainly from brands such as Pinnacle, Skybox, Score and Fleer. I was intrigued by the of number of more 'interesting' cards advertised as inserts, however the seller was asking ridiculous prices and not surprising very few, if any, were snapped up by collectors in the UK.
Patience however is a virtue.

I'm not sure what to make of these baseball cards, if you can call them that. They are more like a printing plate.

They come from the 1999 SkyBox Molten Metal set.

The 1999 SkyBox Molten Metal set was issued in one series and distributed in six-card packs with a suggested retail price of $4.99. The set features 100 of the game's top veterans in the Metal Smiths (cards 1-100) subset with an insertion rate of 4:1 pack; 30 of today's power hitters in the Heavy Metal subset (101-130) inserted one per pack; and 20 of 1999's hottest rookies in the Supernatural subset(131-150) with an insertion rate of 1:2 packs. The cards are silver-foil on 24-point stock and enhanced with additional holofoil and wet laminate.

These cards are from the SkyBox Molten Metal Xplosion parallel set

Randomly inserted in packs at the rate of one in two, this 150-card set is
parallel to the base set printed on metal stock with added etching, rounded
corners and foil stamping. A promotional card featuring Kerry Wood was
distributed to dealers and hobby media several weeks prior to the product's
national release. This unnumbered card can be readily identified by the text
"PROMOTIONAL SAMPLE" running diagonally across the back.

Although it wasn't the sample card that I was able to pick up, instead 7 'metal ' cards:
#15 Ruben Rivera Padres
#24 Sean Casey Reds
#32 Ray Durham White Sox
#34 Richie Sexson Indians
#75 Eric Karros Dodgers
#145 Sammy Sosa Cubs
#146 Kerry Wood Cubs
Not sure which genre of collecting to place these. Oddball, gimmick, parallel, inserts, alongside printing plates? At first I thought that Skybox must have had a hell of a time disguising these to ward off would be pack searchers. But the weight of these cards is not dissimilar to some of the blanks inserted in more recent Upper Deck products, roughly 3-4 regular cards. 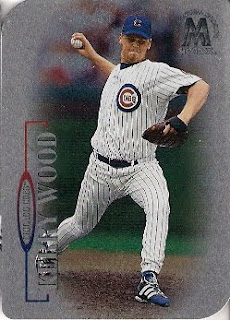 Yes,
I am very familiar with the football and baseball because I had to make sure every uniform and skin tone was exactly like a paper proof only on metal. I ran silver, then gold, green and blue. I also embossed a pattern on a few making them scarce as hens teeth. Each was flawless and hand inspected. I helped start up upper deck and printed the Hula bowl wood cards and more.