So there is a great deal of talk about 2013 and what that means as a collector.
Put aside all the other sets that I am trying to complete, that are accumulating year on year - for me 2013 will be all about Topps Heritage and the 1964 design.
If I try to ignore the 75 short prints, the Action Image variations and Colour variations and just aim for the 425 base set, there is a chance that I can complete before 2013 is out. (Funny I remember saying something very similar about the 1980 design in 2012 Archives). It will be difficult to ignore the Venezuelan parallel, as this black back variation was actually available in 1964, as opposed to the mini parallels and chrome parallel rubbish.
Some of the inserts look interesting too-1964 Baseball Flashbacks, 1964 News Flashbacks, Then and Now 1964/2012 and let's not forget the 1964 Bazooka and Tattoos.
So anyone else going to 'show the love' for 2013 Topps Heritage or is just me? 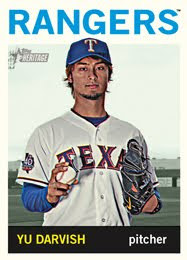 ...maybe. Unless they use similarly abysmal photography to 2012...then no deal.

I'm going to do what I usually do for Heritage... Buy packs and blasters as the urge hits me, attempt to sell any inserts or shortprints I get. I like the 1964 design, so I'll probably buy a little more than most years.