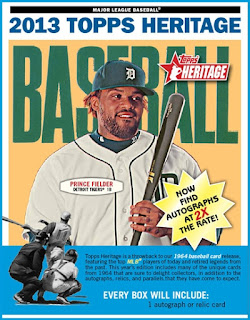 Topps Heritage is a throwback to the Topps 1964 baseball card release, featuring the top MLB players of today and retired legends from the past.
BASE CARDS (1-500):
Base Cards (425 Subjects): Veterans & Rookies in the 1964 Topps Design.
High-Numbered Short-Printed cards (75)

Base Card Variation: - Error Short-Prints Cards reproducing errors from the 1964 set. Limited - Throwback Colt .45s Variations - All Houston Astros players will have a base card variation featuring them in their throwback Colt .45s uniform used during the 2012 season commemorating the last year they were named the Colt. .45s. Limited

INSERT CARDS:
Then and Now:Statistical comparison of a 1964 player vs. a 2012 player who were the leaders in statistical categories.
Baseball Flashbacks:Flashback highlights from the 1964 season.
News Flashbacks:World news moments from 1964.
1964 Topps Complete Set Redemption:A redemption card for a complete set from 1964.
1964 Topps Tattos Buybacks:These original tattoos from 1964 will be framed.
1964 Bazooka Stamps Buybacks:These original stamps will be framed.

1964 (Box Loader):Parallels of selected base cards that are included as 3-card strips with an advertisement back.
1964 Topps Originals (Box Loader):Original cards foil-stamped and inserted in 1-card penny packs. 1964 JUMBO Box Loader: Styled after the 1964 Topps over-sized cards. 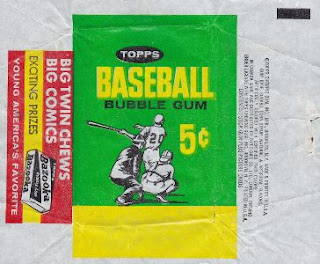 looking forward to this one???