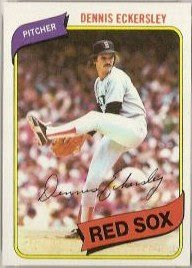 I know everyone has a blog.
They come and go quicker than a politicians promises.
I have started to complete some card trades and wanted to keep a record of the comings and goings, while in pursuit of the 1980 TOPPS BASEBALL complete set.
It all started in 1980 and this was the card that did it.
Card Number 320 Dennis Eckersley.
I knew nothing about baseball or baseball card collecting.
I knew nothing about Dennis Eckersley.
I knew nothing about his home town of Bay Village.
I didn't know where Fenway Park was.
I didn't know what ERA was.
I didn't know....
Well I didn't know a lot of stuff.
But I have spent the last 28 years finding out and collecting a few cards in the process.
It wasn't until two years ago that I made a serious effort to collect the 1980's.
Baseball cards are a rare item in the United Kingdom. E-bay has opened a few doors. For a while I tried to buy every card, every pack and programme that was listed in the UK. It was easy. There wasn't that much, there still isn't. I asked anyone I knew who was visiting the United States to buy me some cards. I amassed a decent collection in the 90's and 00's but the cards from earlier were the 'holy grail'. They eluded me.
Then to my surprise cards from the 1960's, 1970's and 1980's appeared on E-bay.
I bid and bid and bid.
I won some and lost most.
I decided to become more selective and set myself some goals.