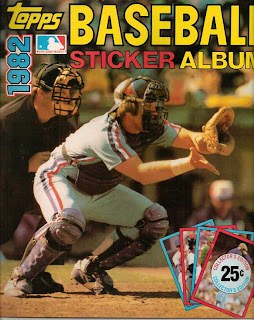 Sticker Albums. What a lovely invention.
I'm not alone in my fondness of sticker albums and have collected football (soccer) sticker albums for years.

Recently an incredibly nice looking 1982 Topps Baseball sticker album, two unopened packs and a batch of roughly 200 stickers ( a few short of the 260 required for a completed album) came up for auction on a popular selling site. At £2.99 including postage I just couldn't pass this opportunity away.

Although the 1982 set is one of Topps earlier sticker albums. A name that is all too familiar now Panini, an Italian company, have produced sports sticker albums since the 1960's. Back then the stickers were called figurines, meaning literally 'little figures' and were not actually self adhesive stickers. From 1961 until 1970 the 'figurines' were attached to the album using glue and were sold per 'sachet.'

Panini had produced Calciatori (player) albums and figurines for 10 years and it wasn't until the 1970 World Cup in Mexico that Panini produced an album for the international market. For a really good look at this album the 1970 completed album pages, has a page by page completed album. Some of the players depicted have faces only a mother could love. 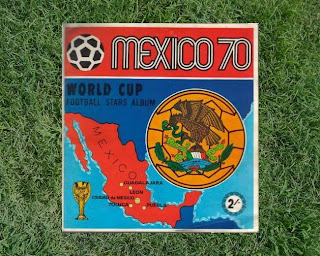 This album semi-completed was selling for around £450.

When Topps entered the sticker market, Fleer had produced stickers for a number of years. For a far greater knowledge than I will ever have, read The Fleer Sticker Project.
The 1982 Topps Baseball Sticker Album is 32 pages. There are 260 stickers to collect to complete the album. Stickers came 5 per pack. No surprise that the album and stickers were made in Italy. The stickers are all the same size, roughly 2 1/2 inches by 2 inches and come in a variety of backgrounds. American League All-stars have a gold background, National league All-Stars have a silver background, read into that what you will. The NL and AL batting and pitching leaders have a red/white/blue background.
The 1981 World Series have yellow/red and yellow/blue backgrounds.
The rest of the base stickers have just solid red or blue backgrounds.
There are 8 stickers that I definitely do not have, which come under the heading of 1981 highlights #113 to #120.
The album and stickers are in lovely condition and I will refrain from the temptation of placing the stickers within the album 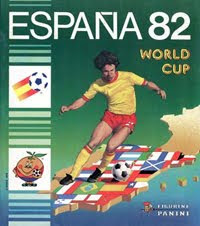 I remember trying to fill that 1982 album (recognize the photo of Carter). Every time we went to the grocery store, my mom would buy me a couple of packs of stickers. Unfortunately... I threw that album away years ago.

Thankfully... night owl just hooked me up with a few of the A's from that set!