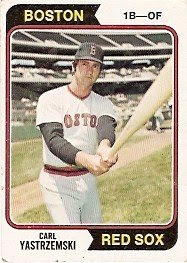 1990 Superstars #2 Ken Griffey Jnr
1990 Superstars #3 Rickey Henderson
1990 Superstars #6 Jose Canseco
It says on the back they were 'limited' to 10,000. Is that the whole set or each card?
The highlight of the package being the 1992 Manny RC and 1974 Carl Yastremski.
However this is not just a random mixture of cards. My only possible conclusion being that the seller of these cards didn't know that some of them were collectable. Are collectable! They knew that they were significant in some way. But why list without picture or a list of the names 'Bench', 'Yastremski', or 'Molitor', 'Griffey Jnr', even 'Canseco'. Odd, very odd.
Posted by jackplumstead at 18:53