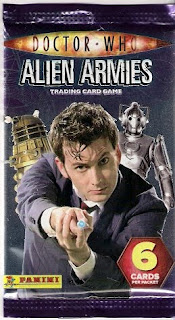 A little off the track from the baseball cards that I try to show here, but my local newsagents has been accumulating a rather large selection of trading cards recently. I am not blessed with a Target or Walmart to ease my baseball card collecting desires, so I try to supplement it with 'other' types of cards. The first to catch my eye was these Dr Who cards.
I have always been a fan of Dr Who. I was raised on a diet of Jon Pertwee and Tom Baker, the Doctors that followed were poor substitutes. David Tennant helped the show get back to its winning formula and the new Doctor Matt Smith looks, if the trailers are anything to go by, like he will be a great Doctor.
In the last few years there has been a variety of Dr Who trading card games. The Alien Armies is the latest. They are produced by Panini and there is a book to house the set.There are some chase cards and a little variety of parallels such as foil, embossed and glitter cards. There are 180 standard cards to collect, as well as 20 Super embossed, 20 super foil and 40 glitter foil cards. At 50p a packet and £4.99 for the collector album they are very popular.
These are my picks from the 4 packets I purchased.
In my opinion the scariest aliens of the series were the Weeping Angels or the people in gas masks. The episodes with the Weeping Angels made me jump . 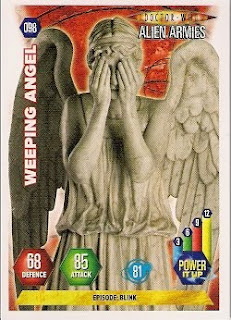 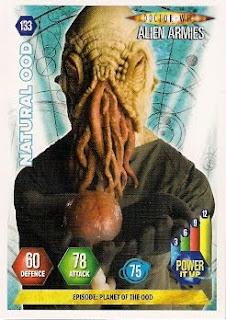 I liked Billie Piper but preferred Martha Jones as the assistant. I wasn't too fussed about Donna Noble. 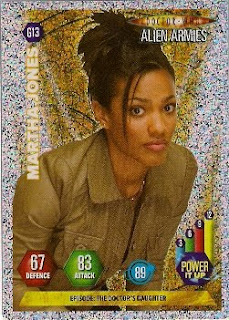 Finally the man himself David Tennant. Who quite possibly made Dr Who as popular as it was in the 70's and 80's. 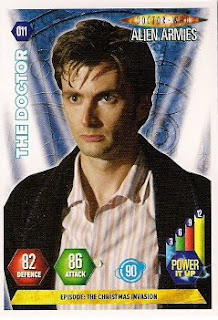 On a final note. My friend and fellow teacher, Dion and I make a Dr Who movie with our school Movie and Animation club. The first movie was 13 minutes long and last years came in at 26 minutes. I was introduced to Red Bull for the last few days of editing as the dealine approached. Although Dion writes the movie, the children do all the acting and some of the filming and editing using movie maker. The caretaker at school is a genius when it comes to making props, so we a lucky enough to have a life size Tardis and impressive Dalek to use in our films. We have just auditoned for a new Doctor, as our last one moved onto secondary school and he regenerated at the end of our last movie. We hope to have a K-9 for this years movie. 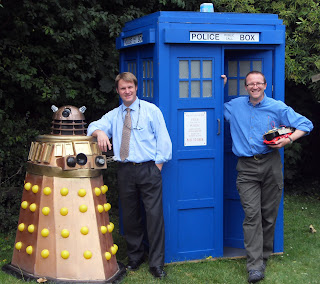 very cool... those props are brilliant!