Getting excited about a bag of dirt. 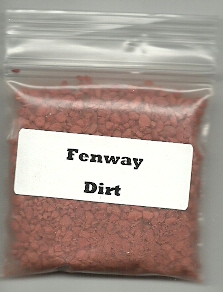 Oh dear, to get excited about a little bag of dirt is bordering on sad.

It reminded me of an incident many years ago when a friend of mine, who supported Charlton Athletic, carefully planted a small 1 foot square of turf in his back garden that he had removed (one would think illegally) from the playing surface of Charlton's home ground 'The Valley'.
Charlton, who had been struck by a monetary crisis, had decided to stop playing at the ground they had played at for over 70 years and ground share with a close rival Crystal Palace. The rivalry between these two clubs may not be as fierce as it is at Liverpool, Glasgow or Chicago but it comes close. There was understandably a level of animosity towards the current owners of the club, so when the final whistle blew at the final game at The Valley, supporters flooded onto the pitch to say farewell to the team and the beloved ground. Suddenly people began to dig up the pitch and take various other souvenirs; corner flags, seats, fencing, roughly anything that had stopped moving. My friend  and his dad carried the section of turf home and lovingly planted it in the backyard. So proud of this small piece of grass that he placed a white picket fence around its border and tendered it more carefully than any other part of the garden. He showed the turf to anyone who visited, like a person who owned a original artwork would delight in informing visitors 'It's an original Picasso, you know!' There was, I think, a hope that it would eventually spread to the rest of the lawn and he could inform visitors -'It's the original Valley turf, you know!'

The Fenway dirt was part of a very interesting package that arrived from Jason at The Writers Journey.It contained a bonanza of ephemia relating to the Red Sox.
Red Sox schedules. 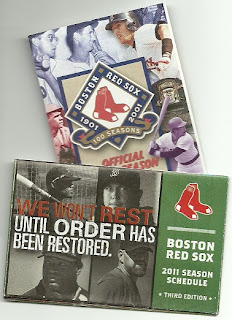 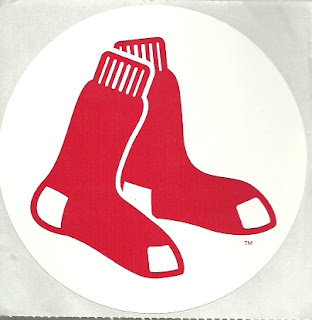 An oddball collection of baseball cards. Including this amazing 3D 'card' that, when placed on a stand, can be set on a rocking motion so that Nomar hits a ball and make an incredible catch. 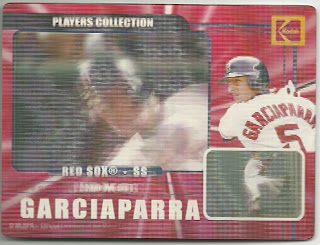 And of course the Fenway Park dirt.
What did I do when I received this package. I opened the dirt to smell it, hoping that in some way it would give me a feel of the ballpark. I poured a small pile into my hand examining it closely. No bat fragments or Red Sox DNA, just a nice pile of red grit, coarser than I thought it would be. I was expecting a more sandy feel, must really hurt to slide on.
Thank you Jason for this amazing treasure trove of Red Sox items.
Posted by jackplumstead at 10:10

I wouldn't use the term "sad". I have a little bag of sandy dirt I scraped off my shoes after my sons and I had played ball on the "Field of Dreams" in Iowa !

Here is a back story on the Fenway Park 'dirt'