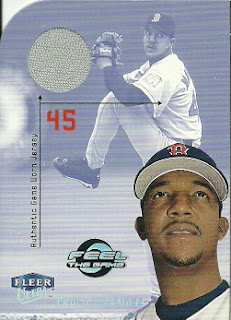 It has long been the staple of this particular blog -the trade post. But appear to have been remiss recently and not posted about many of the trades I have made.
Embarrassingly, I know very little of US geography so need to just pinpoint where in North America (or Canada ) people hail from.

Rhubarb_Runner, who lists amongst his interests; astronomy, baseball cards, the Minnesota Twins, and trombone, comes from St Charles in Missouri. This is the first trade made between my blog and his, the colourfully named 'é rayhahn, rayhahn'. Check out the blog for yourself to find the origins of this pseudonym.
What passed between our blogs was a selection of Twins and a mixture of Red Sox from Topps, Leaf, Kimball Champions, some informative 2008 Documentary and a 2000 Fleer Ultra 'Feel the Game' Pedro Martinez game worn Jersey. An authentic game worn patch from back in the day when there was a possibility that this piece of material may have actually been touched by the man himself.
Thanks to Rhubarb for the trade. 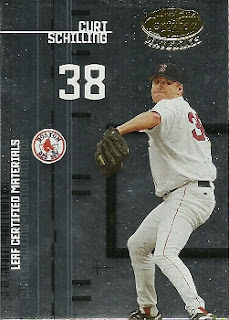