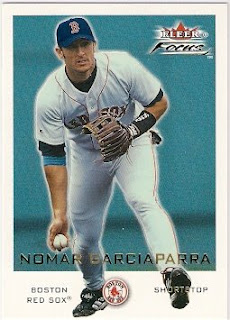 I enjoy reading Mark's Ephemera it has a mix of baseball and real life. His entry about a shopping trip with his daughter amused me in a couple of ways. I take my daughters shopping as well, usually to a toy shop called 'Smyths' or 'Tescos' a huge mega supermarket a bit like Walmart but without the sports card section. I don't think you realise just how blessed you are. I have read many times on blogs quote such as:

"I went to get milk and came back with two blasters and 5 packs of cards..."

"...I went shopping for my wife's/girlfriend's birthday/Christmas present and bought a few packs of..."

"On the way home from work, thought I would drop into Target/Walmart (delete as appropriate) to pick up some packs of cards and a dozen or so blasters...". 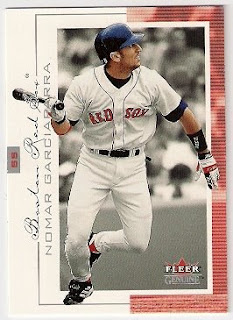 Thanks to Mark for the huge selection of cards and he managed to get some very sweet Nomar cards in there as well.
Posted by jackplumstead at 13:16