I need some assistance with this set of cards, there is very little in way of explanation on the interwebs. When I first collected baseball cards in the early 80's, rather than just admire them I invented a game using a spinner. I kept detailed records of the statistics and players averages. I'm sure I am not alone. There must be many variations on the theme.
I bought The EXCITING and SENSATIONAL Game of 'BIG LEAGUE BASEBALL' on ebay out of curiosity. The copyright is 1949. The seller stating in the advert, that he thought this was probably a reprinted version as it was in such excellent condition. 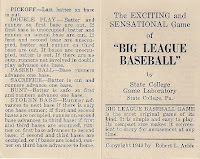 A search of 'Big League Baseball', 'State College Game Laboratory' and 'Robert L. Arble' directed me to similar items on e-bay, an empty Wiki entry and a query as to whether I wanted Robert Marble instead. So I am none the wiser.
The seller was correct it is in excellent condition, untouched hence un-played, which is a travesty. The contents of the box includes 36 playing cards, which are the same size as regular playing cards, two score sheets and a rules leaflet. Simple and easy to play. Its compact size makes it convenient to carry for amusement at any time. 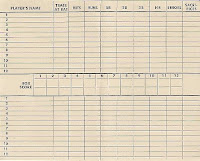 The opening paragraph of the rules leaflet goes like this.

'The game is played according to the rules which exist for the major league baseball games. Any one who is not familiar with baseball rules can obtain a baseball handbook from any sporting goods store.'

Then follows an explanation of some of the cards that are turned up. A very clear description of a double play is given.

This is a small selection of some of the playing cards. Wild pitch looks interesting and is the home run card modelled on the Babe and single on Ted Williams? The simplicity of this particular games puts the recent Topps Attax game in the shade.

Have you ever played this game or a variation of it?
Posted by jackplumstead at 20:43

Watch a small selection of playing cards having picture of baseball players. They are looking very beautiful.
Plastic Card