Cards from the Alley family 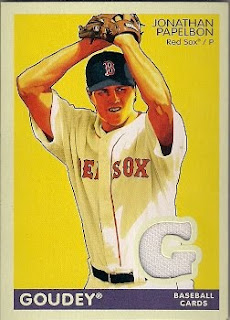 Recently when I posted about the huge UK phenomenon that is Match Attax Football, I was contacted by a reader in the US of A who asked if I wouldn't mind sending her son some cards. He is a big Evertonian and Premiership Football fan. They would be happy to send some baseball back my way. I have no absolutely no problem with this, in fact this is the sort of trade I was trying to encourage. I sent a Match Attax magazine, some other football magazines that had promotion packs attached and a number of Match Attax packs.
The Alley family were more than generous in their return package, five packs of baseball cards, and a Sweet Spot tin filled with roughly 50 Red Sox cards, including the Papelbon Jersey card. I will crack the packs in Pursuit of Red Sox but here is a selection of the cards they sent my way;

A huge thanks to the Alley family as they went all out to send some great Red Sox stuff. I have collected a few more Everton items (and Match Attax cards) for their son and they are keeping an eye out for Jacoby Ellsbury cards at their local card shop. Sounds like another trade in the making. 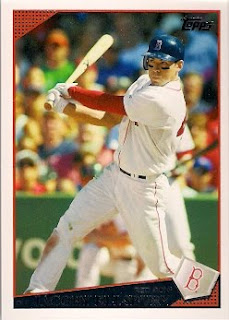