Trade with Brian from Play at the Plate 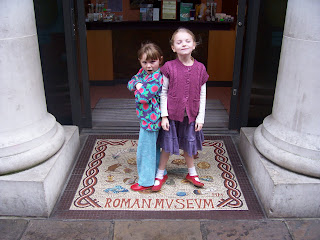 I took my two daughters to the Roman Museum in Canterbury today. They are studying the Romans at school, so I was being a good father and giving them some hands on experience. There is a whole section of 'hands on' being an archaeologist and handling Roman objects. Every time someone digs in Canterbury they discover artifacts related to the Romans and the Iron Age. Most of this museum is underground and the centrepiece is the intact remains of the hypocaust room and patterned mosaic floor. They loved it. When you leave the museum, to your right is Canterbury Cathedral looming above you.
While we were walking the quiet corridors I met Doug. I usually keep pretty much to myself but my wife says whenever I hear an American or Canadian accent I am like a bee to honey. I introduced myself with the usual politeness of 'Where are you from?' This is always a good opener for me as I can then say 'So are you a Phillies/Yankees/Braves/insert team here fan?' Doug is from Austin, Texas, or close enough to, he said. However he is the first person from the Americas that I have met that had no interest in any sport. He finally seceded that he should be a Rangers fan. We chatted a little while about sports, Barrack Obama, why he was travelling; the usual sort of stuff you discuss with strangers.
So it is fitting that I share this large brick of Red Sox cards sent from Dallas in Texas from Brian at Play at the Plate. He is a Texas Rangers fan and immensely proud of the fact.

Brian sent along roughly 70 Red Sox cards from a variety of years. The pick for me was these Dick Perez cards inserted in 2008 Topps Chrome. I had yet to add the Jacoby to my collection. 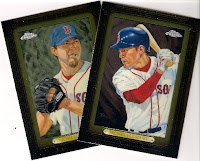 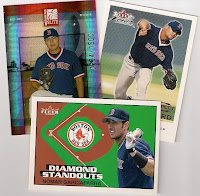 And finally, 13 2009 Topps Chrome cards. This not only took a large bite out of the wants list but, oh how I love shiny...

Thank you Brain. The pile of Rangers grows gradually and I will send it when it is worthy of the selection you have sent me.
Posted by jackplumstead at 20:55

Play at the Plate said...

I just realized as I was reading your latest post about the Blue Jays that I never commented on this post. I'm glad the cards were well received and now have a suitable home.