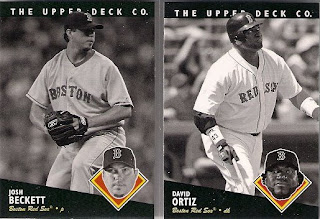 In the last trade I made, with Matt from Heartbreaking Cards of Staggering Genius, he sent these two cards which really caught my eye. They looked familiar.
I have gone from a collector who; 'collects all the baseball cards he can lay his hands on' through to 'picking a specific team such as the Red Sox, a specific set, 1980 Topps and a specific player, Jacoby Ellsbury' to now 'collecting cards that are oddball, eye-catching cards or that look vaguely interesting'.
These cards were inserts from the 2008 Upper Deck Timeline set based on the 1994 UD All-Time Heroes Card Design. Flipping through my 1994 folder I stumbled across one card #189 Bill Buckner from the UD All-time Heroes set. A very quick search of the internet produced some of these cards for sale and surprisingly a 100 cards from the 225 card set on e-bay UK! Check out the auction here. 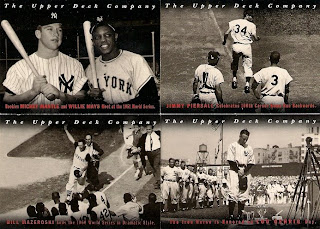 The set is very impressive not just for the names available in the set but also for the iconic images on the cards.
These four cards of Mickey Mantle and Willlie Mays, Jimmy Piersall's backward home run, Bill Mazeroski running through a mob of spectators and Lou Gehrig at Yankees Stadium on 'Lou Gehrig Day' are perfect examples of the quality and content. 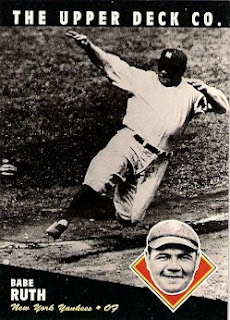 I never thought it was likely that I would own a Babe Ruth card, but now I do. 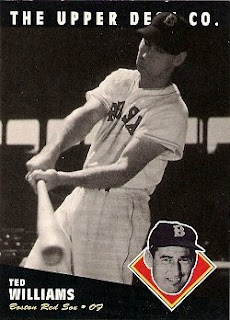 Ted Williams is just one of the names available on the completely black and white set of baseball cards. Nice photography and not a shiny, refractors, game used in sight. 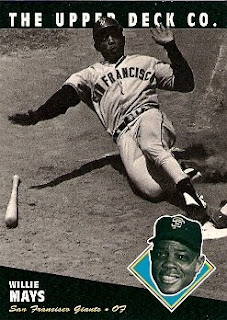