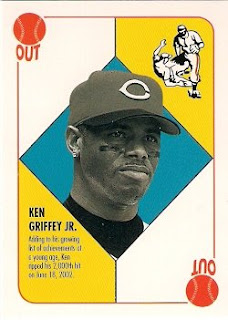 The prices of listing items on e-bayUK have changed recently. In fact good and bad for a number of reasons.
Any item listed with a starting bid below 99p can be listed for free. E-bay just isn't as popular as it once was because I remember having to pay for the listing picture and that has been free for a while. Now this.
Naturally free listing is good for the seller. We have sold a few items and all our items start at below 99p so we list more, mainly because its FREE.
Free lsting is also good for the buyer. I only ever buy one thing from e-bay and that is baseball cards. OK, I admit I buy the occasional random item, but even they tend to be baseball linked. However... there are more baseball cards listed individually now. Pre the free selling incentive, most cards were listed in bulk lots and you didn't really know what you were getting. Now sellers are listing the entire 1988 Donruss set or the 1991 Score set individually, for 99p a card. That is just ludicrous. The entire set may be worth 99p, but each card? That makes the 660 card set of 1988 Donruss worth £654 and the 893 run of 1991 Score worth £885. That is over cooking it a little I know, but you see the problem.
There is a positive side to all this though and that is I purchased this 2003 Topps Ken Griffey Junior insert fashioned after the 1951 Topps Blue Back cards for 99p. There is often negative comments about the inserts placed in packs. I think they got it right with this 40 card insert set in 2003, there was also the Red Back 40 card set as well.
I like inserts, I don't like parallels. That seems like laziness to me. 'Let's just make the same card but write the name in gold or change the colour of the border'. 'Great idea and lets only make 2008 of them!'
My favourite inserts have been the Topps Allen and Ginter Minis and the 1996 Studio Stained Glass Stars, not to everybody's taste but it smacks of effort.
Maybe its because I live in England, but I don't understand the political campaign set inserted into baseball card sets. Famous people, movie stars but politicians. Can someone explain why? I don't want to collect a card of Tony Blair or Margaret Thatcher. It just doesn't seem right! 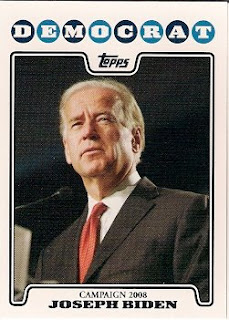