Trade with Greg from NightOwl 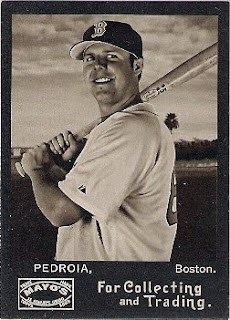 I only collect baseball cards. I have tried hockey and American football but the interest just wasn't there. I remember having a discussion with a fellow collector who was a basketball fan and collected the autograph cards of some of his favourite players. He then started to collect the autograph cards of baseball players, when he had very little interest in baseball. I thought this odd at the time as I am not a multi-sport collector. That changed however when Topps released the Mayo Football set, these cards looked fantastic. The simple black border and sepia tones shouted style. I needed to get a hold of some and when packs were being opened on blogs, my eagerness for packs continued.
Recently a package of cards arrived from my friend Greg at Night Owl Cards. I had sent some Dodgers and this was the 4th (possibly 5th) trade we had completed. Lo and behold enclosed was the Dustin Pedroia Mayo insert.
I like shiny cards but I also like the simple sepia cards. But which is best? Does anyone else feel the same about the B+W and sepia cards or are they just another crappy gimmick? There were also some B+W Upper Deck inserts in the Timelines set if I remember correctly.
Greg also sent along this great selection of cards:

Thanks again Greg. Not only for the 1980 Topps I needed , the Mayo insert and the Jacoby but also these great cards. 1960 was a fine looking set.