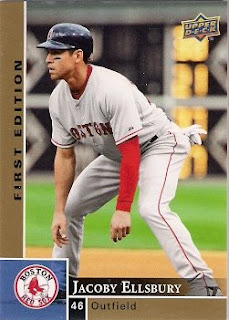 Finally! I say that with enthusiasm. Finally there is a Blue Jays collector on the Blog circuit. When Charles contacted me, via my good friend 'Big B's blog Waxaholic, to say he had started a blog on the Blue Jays and would I like a trade for some Red Sox. I couldn't reply with a YES quicker. I had searched for a Blue Jays collector for months and the pile of cards was growing. Eventually in February I contacted a Blue Jays blog and put a APB for someone (anyone) who was interested in some Blue Jays cards. I was contacted by Jonathan, from Toronto, who had incidentally just started to collect again after they installed a card vending machine in his local bowling alley. I sent him a rather large stack of Blue Jays cards. As of yet he hasn't sent anything back but I have found people to be true to their word. Charles however is a rare find, he posted straight away the entire 2009 Upper Deck First Edition Red Sox set. Included my first Jacoby Ellsbury of 2009. I am glad to find a home home for all my cards and to find a trade buddy for the Blue Jays is brilliant.
Charles sent these along, all 2009 UD First Edition:
#SQ8 David Ortiz
#SQ13 Josh Beckett
#34 David Ortiz
#35 Jacoby Ellsbury
#36 Coco Crisp
#37 J.D.Drew
#38 Daisuke Matsuzaka
#39 Josh Beckett
#40 Curt Schilling
#41 Clay Buchholz
#42 Dustin Pedroia
#43 Julio Lugo
#44 Mike Lowell
#45 Jonathan Papelbon
#46 Jason Varitek
#47 Hideki Okajima
#48 Jon Lester
#49 Tim Wakefield
#50Kevin Youkilis
#51 Jason Bay
#52 Justin Masterson

Thank you Charles and welcome to Baseball Card Blogroll. 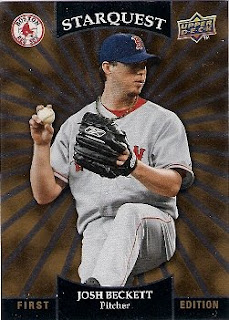 I was happy to find a Blue Jays collector also. All of my Blue Jays cards are intransit to Toronto as I type. Now if I can just find trade partners for the Rockies, D-Backs, and Pirates.