One of the best days ever and 2009 Goudey

When I arrived at work this morning, I found laying on my desk on top of a pile of papers this jumbo pack of 2009 Goudey, a jumbo 2009 Upper Deck Series 1 and a jumbo 2009 Upper Deck Series 2.
I had just returned from a two week break and one of the teachers from school went on a holiday to Florida. I had know this since about January and pretty much reminded her daily to bring back 'anything baseball 2009'.
I was very excited to see these packs deliberately placed for easy recognition. As packs, any packs, are a rare commodity in the UK unless you purchase them from the US and get diddled on the postage (and more often than not on customs charges). So this fantastic looking pack blew me away.
I went to thank her and walked into her office. "I have something for you!" she said and revealed from a plastic bag a blaster of 2009 Goudey and blaster of 2009 Artifacts plus some US Simpsons stamps.
This is the best day ever!
Wow thanks. Thanks too for the cards on my table. Wait a minute. Not from you? Then Who?
To cut a long boring story short, unbeknownst to me another teacher also went on a holiday to the US. She had heard me harp on so much about baseball cards, when she saw these in a shop she thought I might like them. She wasn't wrong. I may be a pain in the arse but it does pay dividends.
Besides the cards being on my desk there was also a pile of telephone messages, letters and assorted random paper work that had accumulated in my absence. Unfortunately the cards had to wait. Well sort of. I opened this package of Goudey a little too over eagerly before I even went to thank to purchaser.
And who should rise from the bequest?
None other than Jacoby Ellsbury. This was going to be a wonderful day. 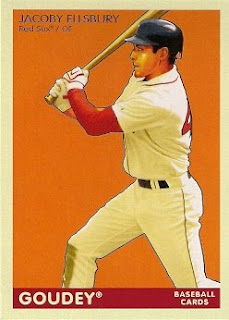 The other 15 cards from the pack were:
#2 Max Scherzer D-backs
#26 Michael Bowden Red Sox
#52 Brandon Phillips Reds
#50 Alexei Ramirez White Sox
#76 Josh Willingham Nationals
#86 Chone Figgins Angels
#88 Jered Weaver Angels
#107 Mat Gamel Brewers
#121 Kevin Slowey Twins
#133 Phil Coke Yankees
#143 Johnny Damon Yankees
#158 Shane Victorino Phillies
#167 Chris Young Padres
#181 Bob Gibson Cardinals
#191 Michael Young Rangers
plus #28 Jacoby Ellsbury Red Sox
I collected the whole 2008 Goudey set and thought about collecting the 2009 set as well, however I think I will wait to see what the verdict on the Goodwins Champion set is and then decide.
Haven't had a chance to opened the other packs yet but will post them in Pursuit of Red Sox when I do.
As to the rest of the day? It all went in a Goudey blur.
Posted by jackplumstead at 21:12