Seemed like a good idea at the time (SGIT) 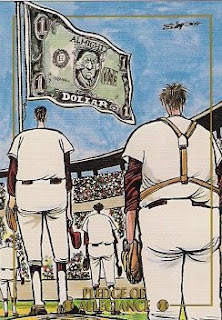 This would have to go under the category of 'It seemed like a good idea..'.
I have watched these particular baseball cards a number of times and they never sold (That should have given me some clue)eventually I bid and won. I will offer as many excuses as possible: 'There wasn't many baseball cards on e-bay', 'I was distracted by the full set description' or even 'they were only 99p!'.
I knew little else other than they are called Cardtoons - Baseball Parodies, produced in 1994 in Tulsa. There are 8 cards per pack. 95 cards in the base set and four inserts aptly named Big Bang Bucks (20), Politics in Baseball (11), Field of Greed (9)and Foil Etched Parodies (10), apparently these are the funniest cards according to the wrapper. 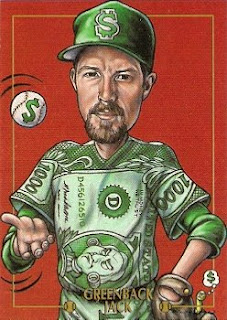 There is a recurring theme to these cards and its MONEY. Whether it be about ticket prices, players salaries, the amount paid to agents and other hangers on and the players strike. There is even a sly mention of drug taking. Most however deal with money.
There are some parodies however. Fowl Boggs..hmm, Yankies are called Crankies, Dodger-Codgers, White Sox -Tight Sox, Athletics-Pathetics, that sort of humor. 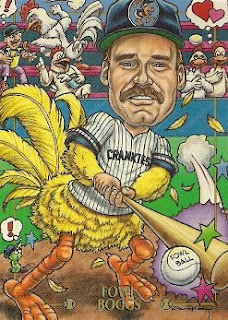 My favourites: Video Nomo, Ripkenwinkle, Tom Lasagne and Rambo Canseco.
When I bought them, I didn't know what to expect and although some are amusing, these appear less of a parody and more of an attack on the owners, who are referred to as egotistical and obnoxious. and the players, referred to as conceited and arrogant. Maybe that was the climate in 1994/5. 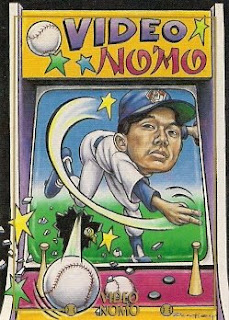 They are up for grabs if anyone would like them (the whole set is here plus some inserts). A trade would be nice but a good home is better.
Posted by jackplumstead at 08:01

seems like a set you would want to keep . . . if you dont, I would cherish this set and treat them right.