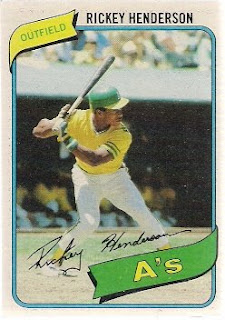 I am now the very proud owner of the most sought after card in the 1980 Topps set. This Rickey Henderson Rookie is now mine, all mine, Hahahahaha...
Sorry there was an immense rush of blood to my head.
I have made several attempt to purchase Mr Henderson in the past few years, obviously unsuccessfully and had pretty much given up. I convinced myself that it would be the last card I would need to complete the set. However when it showed up on e-bayUK of all places, I knew it belonged to me. For most of the time I was the winning bidder and a late-ish flurry from another bidder and for a short while I thought that another Rickey had slipped through my fingers. I remained calm and determined and eventually won.
Now I move my sights onto card #580 Nolan Ryan and 30 other 1980 Topps.

Good work. Another key one will be on its way to you when I get things packaged up.

Awesome! That Rickey card is one of my favorites.

I have numerous 1980's right out of the gum pack if you are interested. For that matter I have many years. Not a dealer and considered very fair. Let me know.