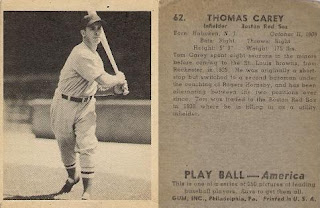 There are currently 954 baseball card related items listed on e-bay UK. They range from single cards, team sets, year sets and guides, not unlike the USA. They include the good; a set of 111 1971 Topps cards currently at 99p, the bad; a 1986 All-Star pop up of Dwight Gooden for £4.99, to the downright obscene: 240 1993 collectors choice cards for £25.00+ £10.00 postage.
There are mostly singles ranging from 1960 to present day. The term RARE is used or should I say overused in abundance. Occasionally there are items that draw some interest.
I have mentioned that in the past, when there was only about 100 baseball related items for sale on e-bayUK, I would bid every time. Now I am looking for specific items. Any card lot pre-1980. I usually go for lots of cards rather than singles. Besides the Red Sox there are other teams I look out for so I can trade with my friends in the US.
Recently a range of cards came up for sale. The seller had 10 lots, each was for cards from 1939 to 1960. They drew a great deal of interest and understandably grew quickly in price. I threw in a few bids for some of the bigger lots 40 1952 Bowman cards, 50 1958 Topps but one escaped my eye until quite late, the above 1939 Play Ball card of Thomas Carey. As I chased some of the other auctions I put in a bid for this card and didn't think (while really hoping) I would be successful in winning. I lost out on all the others, which went for reasonable prices but won the 1939 Thomas Carey. This is now the oldest card I have in my collection and it just happens to be a Red Sox player. It is not a big name player, it not graded, its not in perfect condition and its not properly centred. I like it.
I'm not sure how this card found its way into the UK, but it is now here to stay.

Thomas Carey
Infielder Boston Red Sox
born Hoboken New Jersey, October 11th 1908.
Bats right, Throws right.
Height 5'9" Weight 175 lbs
Tom Carey spent eight seasons in the minors before coming to the St. Louis Browns from Rochester in 1935. He was originally a short stop but switched to a second baseman under the coaching of Rogers Hornsby, and has been alternating between the two positions ever since. Tom was traded to the Boston Red Sox in 1938 where he is filling in as a utility infielder.

Nice job. A quick search through ebay completed shows that you picked it up for quite a song.

Sports Collectors Daily just had a blog entry about the 1939 Play Ball set.