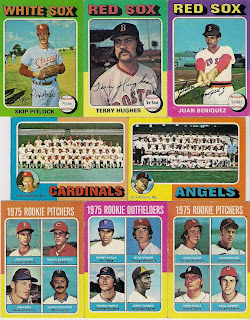 Here is another of the 'speculative' bids I put on e-bay recently. It was for a lot of 1975 Topps mini's. The seller listed 24 including just two Red Sox #601 Juan Beniquez and #612 Terry Hughes, so I put in a bid and just left it to run. I won. Which reminds me.
My dad is a mad keen fisherman. When I was younger, my dad would take my brother and I fishing. We lived on a river, close to the coast, so every weekend we would go fishing. One weekend we would go beach fishing, then the next weekend fishing from the boat, or from the shore under the railway bridge. We even went away camping and fishing. He taught my brother and I how to fly fish. I ate so much fish, my Omega 3's must be through the roof.
Although I think we overdosed on the angling. My brother hates fishing now, he will go for my dad's sake. He enjoys his company, but tries to fish as little as possible. I haven't fished in years and the thought of it brings back some pretty good memories.
While we were out fishing and there wasn't anything biting, my dad would adopt what he called 'His strategy'. It was basically sitting back, feet up, hat over your eyes pretending to be asleep. My brother and I would follow suit and without fail the fish would always bite and I mean always. As a child it was fantastic. It was proably more of a watched pot never boils situation, but it never failed. Someone would always get a nibble.
Sometimes we would be out in the boat for hours, so it passed the time. He had a similar way of finding a spot to fish as well. Suddenly he would just stop the boat or at a part of the beach and say there is a deep bit here, the water is moving right here or the current looks good. It was probably a load of rubbish, but we believed him. (There is still a part of me that does.)
Although I think that some of these 'speculative' bids that I lay are a matter of a luck and 'the watched auction never boils'. I like to think that I adopt 'My strategy' and lay back with my hat over my eyes. I lose most of them but I win a few and on the whole, helps to make my baseball collection a little more interesting and fun.
My dad would be proud of me.
Posted by jackplumstead at 17:11

That's my kind of strategy. And if it lands you '75 minis, then it's successful as far as I'm concerned.

I just posted about '75 minis. I love those things.