Trade with John from Sac Bunt 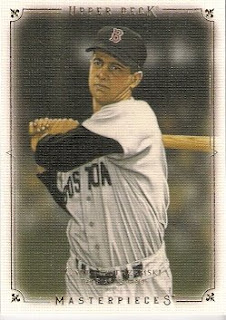 A great package arrived during the week from John, a Twins Fan, at Sac Bunt. I had completed a trade with his fellow Sac Bunt'er' Chris in February. In that post I confused them. I won't be making the same mistake again.
I understand that this is a difficult trade for the boys at Sac Bunt who 'hate the Red Sox almost as much as the Yankees.' So I was pleased to have received the cards and what a great selection there was too.
I really liked the Upper Deck Masterpieces set. It was popular with other collectors too. The canvas feel and look, even the off-white (I'm sure there is a name like Vanilla for it) card colour gave this set a very unique feel. They have produced this set two years running and changed very little. Although the insane number of parallels and the ridiculous border names such as Ionized, Bronze Ore, Hades, Forest Green, Persian Blue, Serious Black and what the hell is Urban Grey? Is it a variation of Rural Grey or Commuter Belt Grey? These really put some collectors off. So whether of not Upper Deck will go for three straight years I'm not sure. 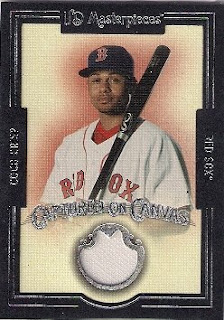 Thanks John. These are such excellent cards. It was great trading with you.
I really wanted to show the Dice-K Topps card, which is blue. But the scanner wouldn't capture it very well. I very nice David Ortiz game used will have to do. 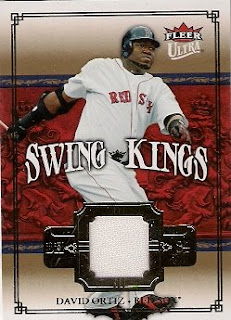