Trade with Adam from Thoughts and Sox 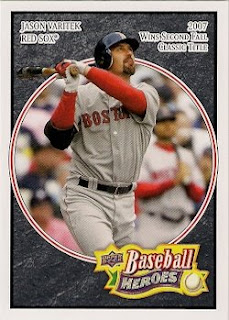 I really should collect Jason Varitek or even cards of catchers. Its a Red Sox name that a frequently pull from packs and, it would appear, that others do to. This latest lot of cards comes from Adam at Thoughts and Sox. A fellow Red Sox supporter, collector, follower and blogger. He has an extensive list of his Red Sox needs, which is handy because I have an extensive list of Red Sox doubles from other trades. A trade was arranged and the return package arrived on Thursday, which is very quick considering it was posted the previous Saturday in West Plains Missouri. I was surprised too by the size and weight. I thought that this was a pile of cards with an armoured tank of packaging. It was cards but also a book, 'Why not us?' 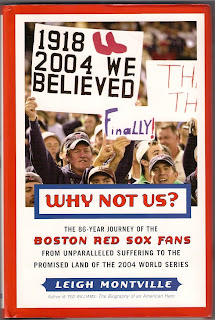 If not sure if Red Sox fans read books about other clubs and vise-a-versa. I have read books about my football club, Charlton, but would find very little interest in the history of say 'Hull City'. On the other hand I have read the biography of David Beckham, Paul Gasgoine and Bobby Moore.
Baseball literature is rare but not unknown in the UK. My local bookstore called Waterstones has a label for baseball between 'Badminton' and 'Basketball'. I have yet to see a baseball book in this section, plenty of basketball and boxing, one or two on badminton, biathlon and billiards. There was even a book on 'Beach volleyball!' But no baseball.
My own limited collection consists of:
'Baseball for Dummies'
'The 100 greatest baseball players of the 20th Century'
'The 100 greatest baseball games of the 20th Century'
'The Iowa Baseball Confederacy'
'101 Reasons to Love the Red Sox'
A pile of children's baseball books:
'Baseball in April and Other Stories'
'Babe and Me'
'Jackie and Me', etc and more
All these books have come from friends or work colleagues. All except the '100 greatest' are pre-owned and bought from a charity shops. They are thoughtful (I think-I'm not too sure about baseball for dummies) gifts and appreciated. The book sent by Adam will join this small but cherished collection.
He included some cards as well:
1982 Topps #602 Rich Gedman
1984 Topps #56 Gary Allenson
1985 Topps #116 Dennis Boyd
1985 Topps #696 Mike Easler
1986 Topps #233 Steve Lyons
1987 Fleer #27 Marty Barrett
1990 Donruss #476 Kevin Romine
1990 Topps #402 Mike Greenwell
1991 Score #446 Tony Pena
1991 Score #823 Jeff Plympton
1991 Score #838 Josias Manzanillo
1993 Stadium Club #315 Greg Harris
1994 Pinnacle #17 Mo Vaughn
1996 Score #508 Scott Hatteberg
1996 SP #40 Mo Vaughn
1996 Stadium Club #303 Mo Vaughn
1997 Topps #243 Aaron Sele
2006 Fleer #183 Craig Hansen
2008 Baseball Heroes #20 Jason Varitek charcoal
2008 Baseball Heroes #26 Curt Schilling
2008 UD Timeline #30 David Ortiz
Thank you Adam for the great cards and the Red Sox book. Greatly appreciated and I will continue to monitor your checklist as much as possible. 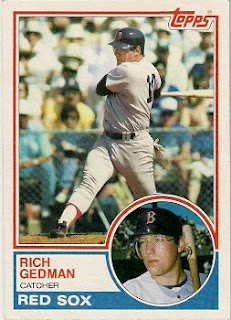