Trade with Mark from stats-on-the-back 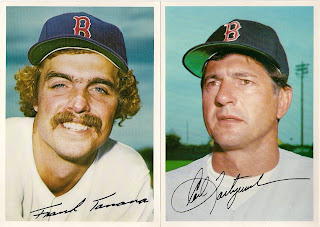 In a recent trade with Mark from stats-on-the-back he decided to 'go BIG and ODD.

I let Mark know that I didn't hate 'em at all, in fact quite the opposite. The set of Red Sox photographs from 1981 are 5 inches wide by 7 inches tall. The checklist is the who's who of Red Sox baseball. What I would like to know is if the players knew the photograph being taken would appear on a glossy 5x7. Some of the younger players posed batting or fielding but the 'Hey Dennis', 'What?'-snap photograph is an unfortunate one. But then, 'Hey Carl', 'What?' -snap that's is unforgiveable. What about the 'If you take my photo I will jam that camera..!' from Carlton Fisk. At least Frank made an effort, perhaps that hat just belongs to someone else.
They look as if they were taken at spring training, that is a palm tree I see in the background?
Are there many in New England? 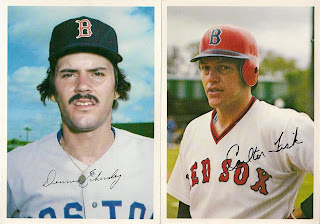 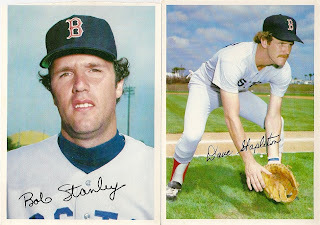 Seriously Bob, these will go on a 5x7 glossy. Look at Dave at least he tried.
Posted by jackplumstead at 18:25

Labels: Mark, Mets, Stats on the back, trades

These shots were taken at spring training in Florida, which is why there are palm trees.